Reached THE MAX? That would be nice!!

Last month, a fine young boy named Max Wyatt was riding his bike with his dad (in my neighborhood!) when he was struck down in a collision with a woman driving a minivan.  Details are still sketchy and the investigation ongoing, but based on all accounts, Max and his dad were doing everything right.  Poor Max was dragged down the street a ways, and bystanders rescued him from underneath the car.  He was flown to a children's hospital in Salt Lake City, and (thank goodness!) seems to be on the mend - albeit very slowly.  We all hope and pray that he has a complete recovery.

Friends of the Wyatt family have started a campaign to raise funds for his care... and Jimmy Hallyburton, founder of the Boise Bicycle Project, is also doing what he can (as always) to raise awareness about bicycle safety.  (He's also good friends with the Wyatt family, raising his stake in this particular drama.)

Jimmy is encouraging people to make a bracelet out of a bike spoke as an awareness symbol.  But more than that... he's put together a public safety meeting that will hopefully involve concerned citizens as well as local policymakers, scheduled for Wednesday 10/6 at 6pm, in the Rose Room.  (I hope that's correct info!  I'm gathering this off Jimmy's Facebook postings, and I'm not a Facebook power user!!)

(Jimmy also has an audience with Governor Otter on October 14.  I've gotta hand it to the guy - he's totally dedicated to making a difference!)

What more can be done, to make our streets safer for cyclists?  (Other than separating bike traffic from motor traffic, and that will NEVER happen comprehensively.)

I happen to know the lady who was driving the minivan.  She's devastated.  She has kids of her own, including a little girl about Max's age, and they ride bikes.  She's a very conscientious person.  She doesn't even own an electronic handheld gizmo, so she wasn't distracted by her texting or yappin' on the phone (like so many people these days).  I'm sure she'd gladly trade places with Max in the hospital room, if she could.  She says she can't remember much of anything leading up to the tragic moment... I s'pose shock will do that to ya.  I'm NOT excusing her; she was almost surely responsible for what happened.  But it makes me realize that one or two seconds of inattentiveness while driving can affect lives in a profound way.  How do we get motorists to truly appreciate how critical it is, that they focus on their driving, in our A-D-D day and age?!!!

Also... how can we make cyclists appreciate how critical it is for them to be legal, visible, aware, and "defensive"?  Max and his dad were probably doing everything right, but just the same, they flew under the driver's "radar."  It's horrible!  I see Bozos on Bike every day, who are riding illegally and downright dangerously, apparently trusting good luck and the attentiveness/skill of the Motoring Public.  (NOT a good place to lay your life on the line, seems to me.)

I'm not sure there is an answer, other than vigorous enforcement of laws, and a dedicated campaign of education.  I'm vitally interested in bicycle safety, and look forward to what emerges from the meeting.
Posted by Bikeboy at 2:41 PM No comments:

Pardon me while I go all proud-grampa on you.  Here are some photos of my three beautiful granddaughters, with their buckets on. 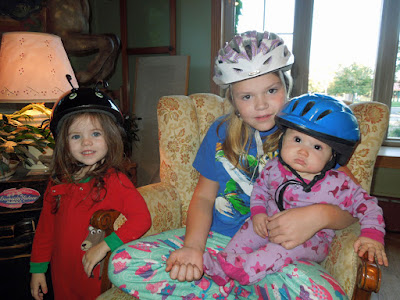 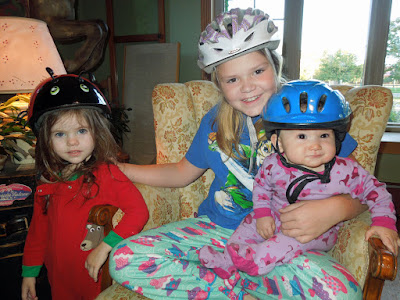 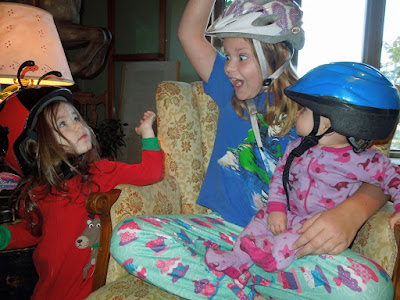 Bonnie, 2, is on the left.  She's got an awesome lady bug bucket, and as soon as I put it on, she wanted to go for a bike ride.  (She rides in a seat in front of me on the "beater bike," but has just about outgrown the seat.  She went almost 400 miles with me last year, and we're over 300 together this year.)
Mackenzie, 8﻿, has been riding bikes as rider or passenger since before she was a year old.  Back in '11, she and I did one of the most enjoyable projects of my life - we rode to 92 playgrounds around Boise over the summer!  She rides her own 24-inch pink bike these days... and it's a bit harder for me to get her to go; pedaling your own bike is harder than riding the tag-a-long!  And... as she gets older she has more interests competing for her attention.
And Maren, 7 months, is visiting from far-off Providence.  It's going to be more of a challenge to ride bikes with her, but we'll figure something out.
Posted by Bikeboy at 9:08 AM No comments: