Good fortune was mine...  took advantage of the nice weather.  You know it's going to be a good year and decade, when you squeeze in 20 miles on Day 1!

Out Orchard and Gowen, for an armament check.  (Gotta make sure we're ready for the Ayatollah and his minions!) 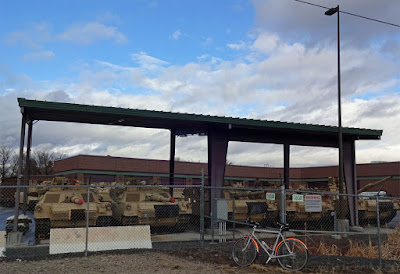 Did a loop around the Boise Air Traffic Control Tower. 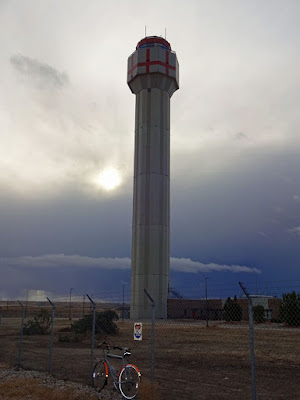 TRIVIA: The tower is the tallest ATC tower in the northwest.  It's the second-tallest building in Idaho, behind the Zion's Bank Center downtown, which is 28 feet higher.  (But the bank building includes an unoccupied vanity tower on top, that's probably the top 40 feet.)  I was lucky to get a tour of the Air Traffic Tower with a Scout group, just before it was turned over to the FAA back in 2010.  Nice view! 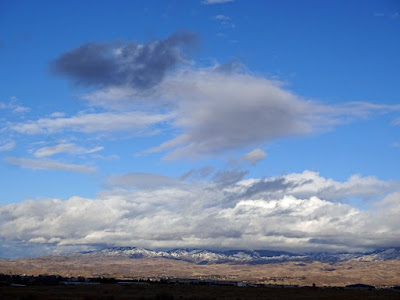 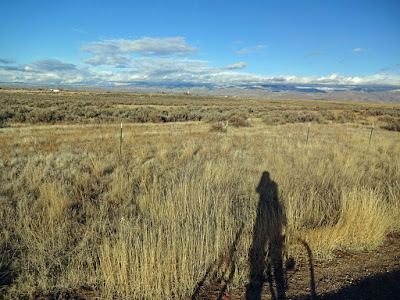 From there, out Pleasant Valley Road, Hollylynn Drive, South Cole Road, Lake Hazel, and back into town on Orchard.  I also had a very pleasant stop along the way to visit with my friend Bob, who I hadn't seen in probably five years.  (Airport tower is still visible in the last photo.)  So - time well spent all around!
Posted by Bikeboy at 6:45 PM No comments:

For 2020, gas prices are projected to hold steady, at less than $3/gallon. Story HERE.

(Note: The story acknowledges that prices tend to be higher in the west. That matches my personal observations, and I'd bet that prices in SW Idaho will top $3, sometime over the summer during peak travel season.)

That's good for motorists; maybe not for alt-trans. I've stated before... I'm convinced that the price of gas incentivizes alternative transportation, likely more than anything else.

Just the same, I'll happily ride my bicycle. In the year just ended I rode 5,597 miles, almost all in Boise and Ada County. I figure I saved around $777 in gas money. (Assuming I would've driven to the same destinations*, paid $2.50/gallon for gas, and the missus' family truckster gets about 18mpg.)

* I would NOT have driven a car to all of the same destinations.  A significant component of my bicycling is for the purposes of pleasure and exercise.  I rarely drive a car locally for "pleasure," and never for exercise!
Posted by Bikeboy at 12:34 PM No comments:

Have you crossed this path before? 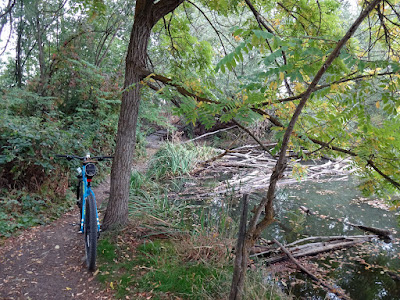 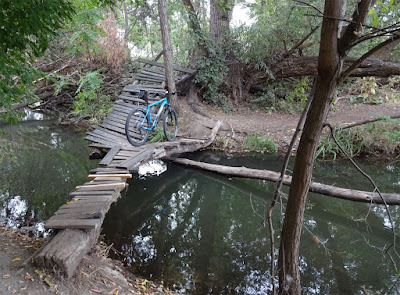 What will they think of next?!?

Have you seen the latest thing?

Now you can get a MOTORCYCLE that has pedals like a bicycle, so you can pretend you're riding a bike!

They seem to be getting more popular all the time.  Some are disguised to look like a bicycle, but with really fat tubes or a giant battery-wart where the water bottle is on a regular bike.  Others make no pretense - they just look like some kind of lightweight motorcycle, with fat little tires, etc.

Most of the "poseurs" who ride 'em aren't very good at pretending, though.  They either don't pedal at all, or they pedal 30 or 40 RPM, as they roll along at 20mph or so.  And they look just as cool as a cucumber.  Pretty obvious that they're not supplying any propulsion.

The weather's starting to turn, and I'm betting most of the motorbicycle poseurs are even more "fair weather" than the casual cyclists.  Time to hang 'em up for the season.  Can't be uncomfortable, after all...

Posted by Bikeboy at 1:58 PM No comments: 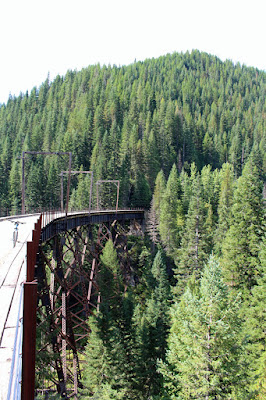 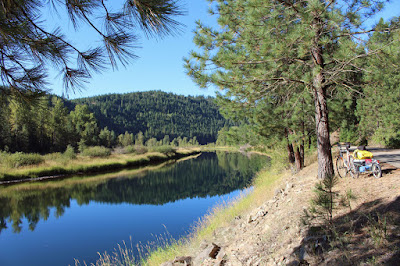 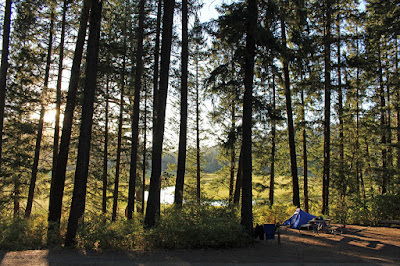 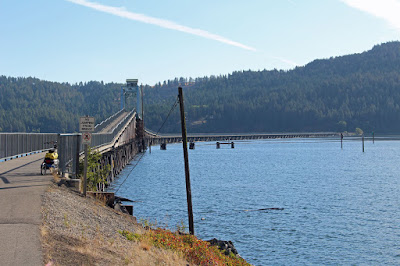 From time to time I've been putting a few miles on the new MOUNTAIN BIKE.  (My "toy" bike.)

It seems very capable.  I'm wondering if I should've gotten the Size L instead of the Size XL.  (I went with my shirt size.  Once I'm riding, it's very comfortable, but it's like a Clydesdale when I'm hopping on... at least with the seat adjusted for comfortable road riding.)

I've gone on a couple of exploratory missions along a canal bank that runs nearby our house.  (The Missus has used the path routinely for walking exercise, but for 29 years I've lived within 1/2 mile of it, and have never set foot or wheel on it.)

It runs all the way over to Boise Motor Village.  Here's the Porsche dealership.  (I like that snazzy gold convertible with the black stripe.) 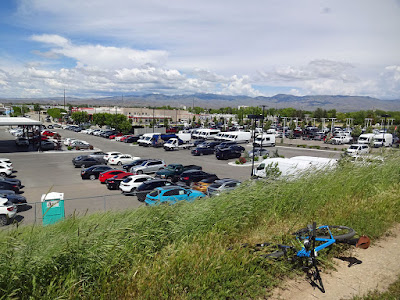 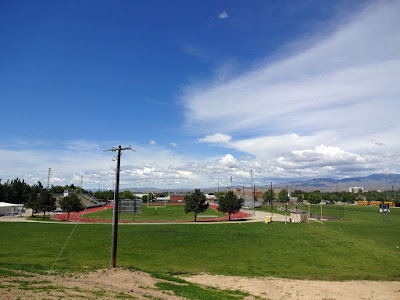 The canal isn't deep - probably waist deep in the deepest spots.  The scenery is at its best, this time of year, even along an old canal bank... 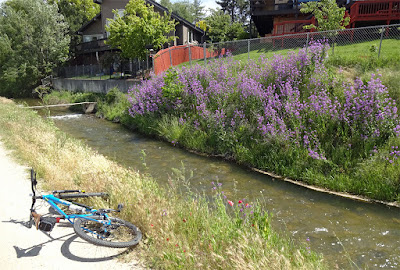 Continuing... we get to the Borah High School campus, from the back side. 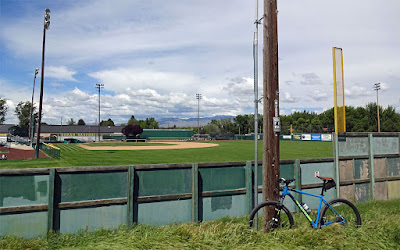 I got off at the same place I got on - Philippi near the Hillcrest Shopping Center.  (The most challenging terrain is near the east end - deep ruts created by 4-wheel vehicles driving on it when it was muddy.)

Today is Memorial Day.  Traditionally I hop on the motorcycle and visit some of the area cemeteries to review flowers and flags.  However, the forecast was for unpredictable weather today, so I stuck close to home... but I did take a detour over to the two Fields of Honor, at nearby Morris Hill Cemetery.  The price of freedom is visible there.  (It's good to take a moment to feel gratitude for the freedom I enjoy, and for the brave men and women who have given it up for that freedom.) 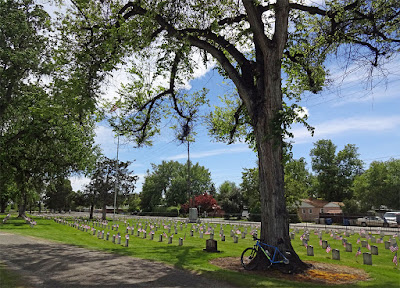 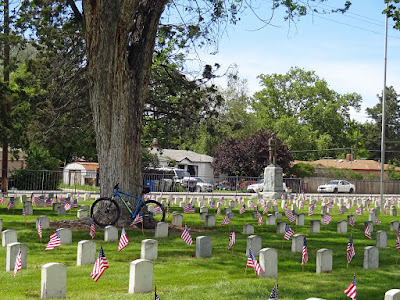 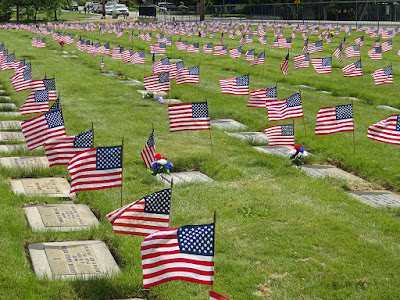