There was a brief article on the Statesman website about a possible bike sharing program coming to town.

The Central District Health Department (State of Idaho) envisions deploying 140 bicycles, in 14 stations scattered about town. I s'pose it would be similar, but on a smaller scale, to Boston's "Hubway" scheme that I commented on last month.

The Health Department is involved, because they want to fight back against the "obesity epidemic" and bad air quality. Noble motives, to be sure... but as much as I'd like to, I can't imagine that local-errand bikes will make much of a dent. (I snidely commented that the bikes will enable people to run for a big fast-food lunch.)

Another eyebrow-raiser is the cost... the grant the CDHD has applied for is $650,000. That figures out to about $4600 per bike. Mamma mia!! I'm thinkin' private enterprise could do it for substantially less... they ought to let out a contract. (Or perhaps they don't think people will participate, unless it's on Italian racing bikes with the full Campy Record setup!)
Posted by Bikeboy at 1:01 PM 3 comments:

Autumn on the Greenbelt

Mackie and I enjoyed a leisurely 7-mile ride on the Greenbelt over the weekend. It was beautiful! Posted by Bikeboy at 8:48 AM No comments: 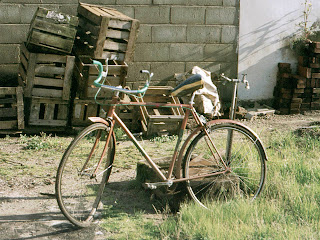 * There are 52,000 full-time missionaries of the Church of Jesus Christ of Latter-day Saints, according to the website. That number, of course, doesn't count the thousands of missionaries serving for other denominations, who I believe also enjoy special blessings, and perhaps special protection, because of the cause they are dedicated to.
Posted by Bikeboy at 11:27 AM 1 comment:

According to Talyn Brumley over at the Boise Weekly, yesterday's election keeps pro-bicycle leaders at City Hall.

Wow! Do those 12% of voters who made the effort, realize what they've done?!!?

"[Reelected Mayor] Bieter told Citydesk that he believed bicycle transportation would become a higher priority in the near future."

"[Newly-elected Councilman] Quintana said that he was eager to begin improving alternative transportation such as bike paths."

That's all hunky-dorky [SIC], but ACHD, not the city, does the roadways in these parts. (Although I acknowledge City Hall surely wields heavy influence.)

If our city fathers seriously want to make our community more bike-friendly, IMO the place to start would be at the police station. The stated position of the BPD is, "Bicycle violations are not a prioroty for the department." When yokels on bikes are breaking the law all over town, it fosters resentment as well as making bicycling less safe. Surely Bieter and Quintana could be more effective than I am, at encouraging a little more vigorous enforcement and education effort by our law enforcement people.

(By the way, I voted. Mostly for the non-winners. And I've gotta admit I paid no attention to their viewpoints on bike issues, figuring that's a function of ACHD.)
Posted by Bikeboy at 1:15 PM No comments:

What gets cold first?

What part of your anatomy gets cold first... to the point of being uncomfortable?

My fingers are always the first thing that "stings," if I'm not wearing the full-finger gloves. Maybe it's because I'm using my fingers, and my ears and nose are just up there, hangin' useless on my head.

Below 40F, my fingers get uncomfortable. I'm good down to about freezing, without ear protection. Pretty much everything else can handle the 15-minute commute ride without discomfort, down to single digits or so.
Posted by Bikeboy at 8:40 PM 5 comments:

BikeSnob NYC waxes snobbish (or more accurately, he's reacting to snobbishness) with regards to sharing the road with motorists. You know... the motorists who have an attitude that they own the road and

cyclists have no business on the road, particularly if it inconveniences said motorists.

Sometimes, when drivers violate my space or demand I get out of the way, I simply ask them, "Why?" The answer is always the same: "I'm in a car, and you're on a bike." Ah, of course, that's an excellent reason. See, they don't give cars to just anybody. Only really important people get to drive. Plus, you've got to take a test to drive a car, and it's so hard that they don't let you do it until you're in your teens. Never mind that these people are usually driving cars with Blue Book values significantly lower than what our bicycles would fetch on eBay; either that, or they're driving some really expensive contraption that any sane person would be embarrassed to be paying for, like a Cadillac pickup truck, which allows you to look like an idiot at the country club and at the ranch. The fact is that a motor vehicle is a "major purchase," and major purchases are how people express their self-importance and project it to the rest of the world. But they're not important, they're merely self-important.

(From the book Bike Snob, P.102. I love the part about the Cadillac pickup truck. That notion is almost as absurd as the Porsche SUV!!)

(Apologies if your internet reader doesn't do well with my hard-coded color.)
Posted by Bikeboy at 10:27 PM 1 comment:

I replaced my back tire last night.

The old tire - a Vittoria Randonneur, 28 width, in white rubber. (For summer, you know.) It had 2400-odd miles on it and I knew it was time to replace because I could see the red underneath the white. (I assume it's the puncture-resistant layer. In those 2400 miles I only had one flat.)

I was a little disappointed in the mileage. The previous tire - a 32 width with black rubber - accumulated 4000+ miles. Both tires are about the same price. I'm not sure if the mileage difference is due to the different rubber compound, or the width. I suppose the 32 has somewhat more rolling resistance than the 28, but not appreciably more. I'll take the increased mileage, if I have to choose one or the other.

In another month or so - when wet or icy roads become more common - I'll switch over to tires with more tread. Or just break down and ride the fat-tire bike.
Posted by Bikeboy at 12:54 PM No comments:

Cycling up 27% in Salt Lake City

An article at Deseret News says that there's been a 27-percent increase in bike commuters in the past 12 months. Impressive!

The findings are based on volunteer counts taken at specific locations, and comparing this year's with last year's. It may not be a truly accurate indicator... but it's all we've got.

What drove the increase? No doubt the poor economy is a factor. Everybody seems to understand that riding a bike is

meaningfully cheaper than driving a car. The bike/ped coordinator also cites the positive health and environmental impacts, and improvements on certain bikeways around town.

One of the reader comments is interesting. "Red" suggests that cyclists should volunteer to drive a street sweeper down the primary bike corridors from time to time. (I'd get on board with that notion!)

The article also links to SLC's official bicycle website. I need to check it out - it looks like it has a LOT of good info. For one thing, I didn't realize that SLC is a SILVER level Bicycle Friendly Community (as recognized by the League of American Bicyclists). They passed up our Bronze level. SLC has obviously changed since the days when I visited somewhat regularly. (20+ years ago.) I still envision those big wide awesome streets, but with few cyclists or cycling facilities.
Posted by Bikeboy at 12:21 PM No comments:

I noticed something interesting on the way to work today. I was heading east on Emerald and just after turning south on Maple Grove I noticed one of those rubber hoses on the road used to measure traffic levels. Except the hose extended over the bike lane only. I have never seen anything like this before. In the past I think that the ACHD has had to count bikes manually, but this appeared to be an automated system.

Hmmm. I know the device he's talking about - a pneumatic hose that, when run over, increments the number on a traffic counting device.

Like Bob, I've not seen one of those in use solely in a bike lane before. I'm also a little bewildered at the timing. Late October seems an unlikely time to be counting bike traffic. (Unless it's being counted by somebody to support a position that too much is being done for the very few people who ride bikes. And that seems unlikely.)
Posted by Bikeboy at 11:37 AM No comments: