My daughter gifted me with this book on Father's Day. (Sweet and thoughtful of her!) 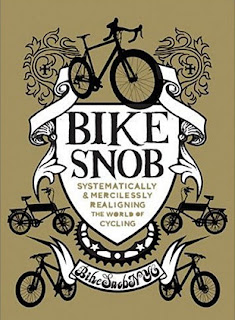 It has no author name, other than "BikeSnobNYC" - also the name of his blog. I've visited the blog from time to time - he's prolific, and obviously a deep thinker. He can write more than I can read! haha

He is identified as "a frequent racer, daily commuter, and former bike messenger himself. He has been published and profiled in numerous publications, including the New York Times, Outside, and Bicycling Magazine."

From reading his book and occasionally the blog, he seems to mostly be snobbish toward motorists (I can identify!) and "hipster" cyclists, whom he regularly scorns, or at least pokes good-natured fun at. "Hipsters" would be the folks whose main motive for cycling seems to be making a fashion statement.

The book was enjoyable to read, and I'd recommend you pick up a copy. I intend to post a few excerpts over the next few days, always attributing the commentary.

[An] important fact about hipsters is that kleptoparasitism is an essential component of their survival technique. Kleptoparasitism is when one animal steals another's prey or nesting materials. ... Hipsters kleptoparasitize their vintage band T-shirts, haircuts, and tattoos from other humans in order to make themselves attractive to other hipsters. With the shants of a mailman, the knuckle tattoos of a prisoner, and the haircut of a young Rod Stewart, the hipster kleptoparasite walks the streets of his habitat like a mating lizard with his throat pouch engorged.

So once the bicycle became trendy, the migratory pattern of the hipster changed. ... In a way, the fixed-gear bicycle was the lightning bolt that struck the primordial soup of trendiness...

Clearly, the hipster's standing in the community is defined by his or her bicycle-having status. Either hipsters have some cool bike and want other hipsters to notice it, or they need an excuse to talk to other hipsters so they comment on their bike, or they don't have a bike at all but are acutely aware of this absence so they use it as an opportunity to engage another hipster to help them find one in the hopes it will serve as the pretense for a blossoming love affair, like the plot of a bad romantic comedy.