I recently read my granddaughter one of my favorite childhood books, The Little House, authored and illustrated by Virginia Lee Burton.

It's the story of a little house (strangely enough!) 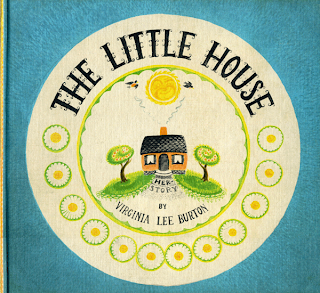 in a pastoral setting, surrounded by tranquility and the beauty of nature. As time goes on, however, the distant big city expands, first bringing roads, then neighbors, and ultimately tenements, elevated trains and the rest of the ugly urban package. The little house falls into disrepair, and of course can no longer be happy until descendents of the original owners happen upon it, and remove it to a new pastoral setting far from the teeming masses. The story has a happy ending.

As a child, I obviously understood from that book that country living is far superior to urban living. In fact - urban living is something best avoided. Just see how everything turns brown and gray and dingy, as urban blight surrounds that poor little house!

In the book, we never get much of a glimpse of the occupants of the little house. But it's a safe bet that they worked the land. After all, it was just a little dirt lane connecting their charming home with the rest of civilization - unlikely that dad or mom commuted. (And it's unthinkable that they might've been able to bicycle into the big city, at least back when it was just a nighttime glow over the horizon.)

It was harsh to become an adult and discover that the big, ugly gray city is where the jobs are. Of course, I've also been fortunate to discover that with some effort and imagination, one can still have some quality of life in the city, even if one does without the expansive vistas in every direction.

I still love the book, as did my kids, and as does my granddaughter.

I also recently read another book, Joyride by Mia Birk. 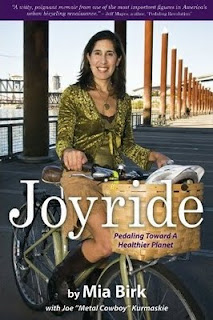 Ms. Birk was the official tireless advocate for bicycle transportation in Portland, Oregon, as it became recognized as one of the most bike-friendly cities in the land. And Joyride recounts some of the struggles that she encountered, as she battled, in a firm but gentle way, on behalf of her vision.

She was fortunate to be surrounded by other "visionaries" who got on board mostly, and sustained her. But I'm guessing they'd all acknowledge her as the catalyst.

I was particularly interested in reading Ms. Birk's book, because she's coming to Boise in May, to do a presentation about "Bikes and Cars: Sharing our Roads in the Treasure Valley.

(The fact of the matter is... if Portland can be bike-friendly, Boise has more potential. Our climate is considerably more bike-friendly, as is the geography. Everything else can be tweaked.)

From Joyride, describing the dilemma of urban sprawl, which is probably our biggest challenge:

Fact: If we build houses far from work places, groceries, parks and schools, and provide no mass transit service, bikeways or walkways, the vast majority of us will drive. Obesity, stress and pollution levels are all higher in sprawling areas, which are less safe overall, factoring in both crime and traffic safety. Older suburbs often have no sidewalks. Schools are often located on major roads. Parents are expected to be chauffeurs. At a young age, kids become addicted to auto transportation. It's hard to break these habits later in life. Suburban residents are so acculturated to driving everywhere that they simply cannot imagine doing it any other way. (Page 163)

She could be describing The Little House!! (And she's most certainly describing Boise and vicinity.)

(I'd recommend The Little House for everybody. I'd recommend Joyride for Portland residents, and for people who are interested in making their hometowns more bike-friendly.)
Posted by Bikeboy at 7:10 PM