I took the scenic route home yesterday, along a road we call "the cow loop." And I believe I spotted an intruder among the dogies. See if you agree. 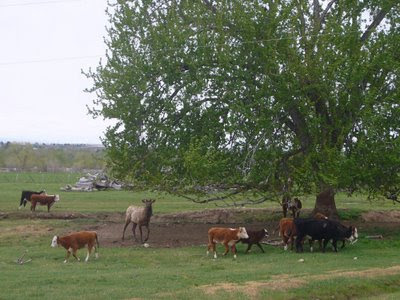 Which raises the topic of critters.

A bicycling buddy told me of recently spotting some pelicans while bicycling.

I've not seen pelicans, but I've seen many blue herons. Many times I've had to change course to avoid running into Canada geese. Plenty of ducks. Kingfishers. Blue jays.

I've seen numerous deer... raccoons, skunks, foxes. Beavers. Muskrats. I followed a coyote on the same road where the above photo was taken, as he took a relaxed pace for a quarter-mile or so, before heading off thru the brush.

One morning I was bicycling through Julia Davis Park; two squirrels were scrappin' in a tree directly above the path when one of 'em lost his grip and dropped probably 20 feet onto the concrete. He sat there momentarily, stunned, and I stopped to avoid running over him. After a few seconds, he came to his senses and scampered off again.

I was riding near Lucky Peak Dam - a "rock chuck" scampered across at the worst possible time, and his path took him directly under my bike. By some miracle, I didn't run over him, but I heard and felt as he whacked the chainring.

I did run over a cat one day.

I was riding along at a relaxed pace, and saw this cat crossing the road diagonally up ahead, at an even more relaxed pace. Cats have keener senses than a lot of critters, so I expected him to either pick up the pace or stop, so as to avoid an encounter. But he didn't! He walked directly into my path, and my front wheel rolled over him!

I didn't crash, which is pretty remarkable. I stopped and looked around, expecting to see a damaged cat... but he must not've been damaged too badly... because he was gone like a shot. 8 lives to go.

I've got a few dog stories... will post at some point in the future.
Posted by Bikeboy at 8:15 AM

Is this the same elk that was down with the cattle along Warm Springs last summer?

Might be, Michael. It's out in the Harris Ranch area... that will too soon be yet another sea of rooftops, as they pave paradise. Papa elk looked pretty comfortable among the herd.

I love the wildlife I get to see cycling, though you've got me beat in species and close-calls! I wonder if car-addicts are aware of how many wild animals live in their city...

On my way home from work one morning that silly elk was standing in the middle of the greenbelt. I had to shoo him off the path to get by. I am just glad that nobody has shot him yet.