Washington's birthday - February 22 - became a national holiday in 1885.  (Back then, Lincoln's birthday was a couple weeks earlier.  Now, by government decree, they were both born sometime in between.) 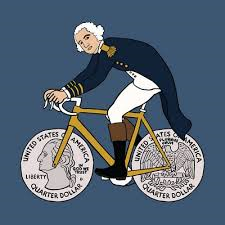 Also in 1885, the USA was going bicycle-crazy!  The "safety bicycle" was the big fad - the "smart phone" of its day.  Everybody had to have one, hundreds of companies were manufacturing them, and the competition made them very affordable, even for common folk.  Because of the bike craze, many cities starting with Boston declared "bicycle day" as well.  After all, since businesses were closed and people had free time, why not give them some bicycle events to participate in?

An article at The Atlantic explains it.  "Riders prepared for the occasion, including the many women who were taking to the new hobby. Many new gowns are already ordered and will be worn on Bicycle Day if the weather will permit... Stores competed to attract the crowds. At the Tinkham Cycle Company, for example, the Royal Hungarian Band played, bicycle bells rang, acetylene and electric lamps flashed, and visitors gawked at bikes with three, four, six, or ten seats. Every customer took home a lily bulb to plant; the owner of the handsomest and tallest flower could redeem it for a hundred-dollar bicycle come June."

Of course, that was back before global warming.  Back when bikes could be ridden in mid-February.  Nowadays there's 4 feet of snow on the ground in Boston.  HEY!  Wait a minute!  What the?!!?  (Boston would be in no shape to host a "bicycle day" this year!  I'm expecting my third grandchild, to be born in Providence RI, just down the way from Boston, and the Missus is having a heck of a time finding transportation to get there.)