Drivetrain of the future?

Last year as the days were getting longer and warmer, I posted a note about the Novara Gotham bicycle that I've had my eyes on for several years.  In most respects, it's a fairly conventional "urban bicycle" with relaxed geometry, medium-width tires, and upright riding position.  But what continues to capture my attention and imagination is the drivetrain.

The Gotham doesn't have a derailleur at either end.  Instead, it has a NuVinci constantly-variable hub that has a 360% range of "gear" ratios, using some balls and specialized oil.  And in place of the conventional chain, it has a belt.  (Similar to the Harley-Davidson motorcycles I've been riding for 18 years.) 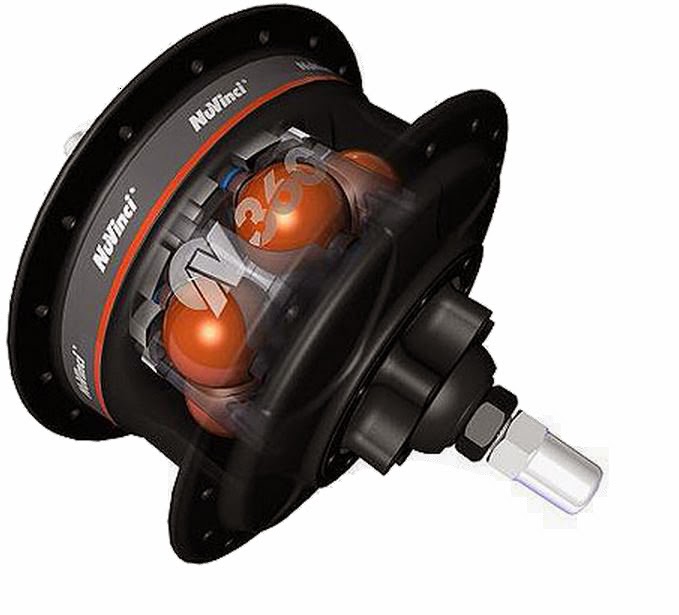 Last spring, I visited the local REI store on a nice Saturday morning, and asked if I could take a test ride on their Gotham - the first one I'd ever seen in person.  (It's funny - on the day I went in, the Gotham was parked next to a "fat bike" with the super-wide tires.  The fat bike had a half-dozen young fellows surrounding and admiring it... nobody was giving the Gotham the time of day.)  I signed my life away, and rolled the bike toward the door to test ride it.  The sales guy said, "Please don't leave the parking lot."  HUH?  What kind of test ride is that?  So, I rode around in the parking lot for 10 minutes.  Big wup!  (I don't feel like I got a fair shake at the test ride, but I liked what little I could sense of the drivetrain - silent, and the constantly-variable thing was pretty cool.)

I'd probably buy the Gotham - it's one of the few "factory" bicycles with the NuVinci and belt, and at around $1400 it's not outrageously expensive.  (The hub alone costs $360 or so.)  The only thing that's holding me back is the question of long-term durability.  REI guarantees the bike for a year.  Fallbrook - the company that builds the NuVinci - guarantees their product for two years.  Frankly, I'd want my $360 hub to give me ten years of trouble-free service!  Or at least five years.

I sent email inquiries to both Fallbrook and REI, asking about the long-term reliability... what a high-mileage rider could reasonably expect. 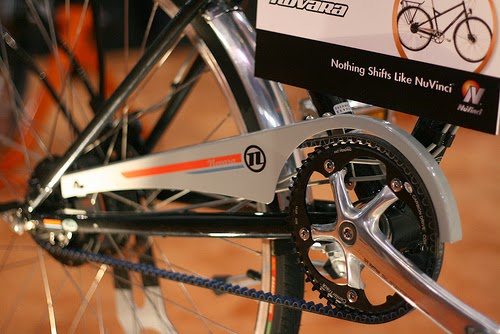 REI, to their credit, got back to me within 24 hours... with a non-answer.  They told me to contact Fallbrook and ask them, so I could make an informed decision.  (Obviously they weren't willing to go out on a limb and vouch for the product's long-term durability.)

I haven't yet heard back from Fallbrook.  Not a good sign.

The concept is ingenious - totally!  The mechanism is complex, compared to a derailleur.  But it's super-simple compared to one of those 8- or 11-speed internal hubs!  (It's called the NuVinci as homage to Leonardo DaVinci - the renaissance artist/inventor/genius - who produced some conceptual drawings that inspired the design of the hub.)  But a fantastic design is only that, if the real-world product isn't durable for real-world use.

I have no such hesitation about the belt drive.  Harley's been using it for 30 years, and it's a winner - lasts longer than a chain, and essentially zero maintenance.  (One comment about the belt - since it is a continuous piece, the bicycle frame needs a void.  The Gotham bicycle has a small section that unbolts from the right side seat stay.)

I'd sure like somebody to step forward and declare that he/she has been using a NuVinci hub for 50,000 worry-free miles.  (I've got nothing against the derailleurs I've been using for 50+ years... but I'd not grumble if I didn't have to clean and lube and replace chains and cogs.)

Marcus that chimes in here, wife has one for a couple of years. Also a guy named Val, used to have one with his Xtracycle. He had emailed Fallbrook regarding gearing for Seattle hills. Val did end up going below the recommended "gear inches" and believe the hub to be great for Seattle and utility bikes. This was the older 171n hub. http://www.bikehugger.com/post/view/mondo-nuvinci-review

Thanks, Clancy... yeah, I'd like to hear from Marcus regarding Mrs. Marcus' experience a year later. (He said she cranks 3-4K mile per year... 5 or 6 of those kind of years would be a good test.)

New-hub tests all seem very positive (once they get past the weight of the thing... and when I figure weight, it's the weight of the bike, the operator, and any cargo, and 3 more pounds isn't going to be a deal-breaker). I'd sure like to see a follow-up report, from 4 or 5 years down the road.