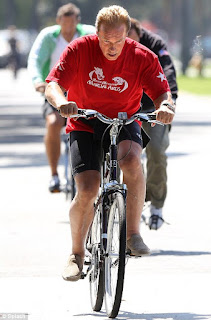 Since he hung up his governator's hat, Ahnuld Schwarzenegger has been gearing up to get back into the movie business, apparently.  And part of his fitness regimen is cycling, according to a story in the UK's Daily Mail. He turns 65 tomorrow (July 30).  One thing that's funny about the British press... they obsess about fashion.  Schwarzenegger "kept cool in a red martial arts t-shirt, black bicycle shorts, and brown boat shoes."

On the scale of 65-year-old guys, I'd say he looks pretty good. Cycling can only help.

The first two "Terminator" movies are favorites of mine.  And I just ordered the original "Total Recall," which has been given a new Blu-Ray treatment, apparently to coincide with the new "Total Recall."
Posted by Bikeboy at 8:04 AM