While we're on the subject of movies...


Have you seen the movie "Plan 9 from Outer Space," written and directed by the legendary Ed Wood? It's on every movie critic's list of the worst movies ever made; I have it in my collection. (Part of the Ed Wood box set, which includes 3 or 4 other movies that are almost as bad.)

I've watched it a half-dozen times over the years, but still can't really describe the plot. It's science fiction... something about space aliens revitalizing the dead, and turning them into zombies. But you don't want to spend all your time trying to figure out the subtle nuances of the plot... because there are all the awesome props, special effects, etc. (Cardboard tombstones in a cemetery... supposedly at night, but you can see the cars whizzing by just behind the hedge... paper-plate flying saucers dangling by strings, etc.) It was the last movie Bela Lugosi was in; he died during the filming, so they hired a "double" who always holds his cape across his face... surely nobody will notice it's a different guy! It's so bad it's hilarious.


One of the many holes in the plot... the movie never properly explains how the space aliens communicate with the zombies.

I think I've figured it out! 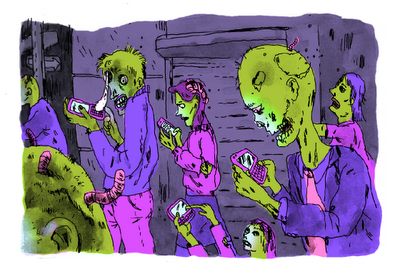 When Wood made the movie in 1959, even a visionary such as himself couldn't foresee the day when smart-phone zombies would be clumsily lurching about, staring at the screens of their phones... perhaps waiting for instructions from their space-alien overlords! I propose a remake of "Plan 9," and all the zombies are clutching their "smart-phones."

(Why do they call 'em smart-phones, anyway? It's not because their users seem so smart, when they are smart-phoning!)

There's an article on the Deseret News website today, "What to do about protecting distracted pedestrians." It cites several examples of pedestrians who sustained serious injuries after walking over cliffs, into holes, etc., while staring at their phones. Emergency room visits by "distracted pedestrians" have quadrupled. "State and local officials are struggling to figure out how to respond, and in some cases asking how far government should go in trying to protect people from themselves."

Officials in the Salt Lake City area are concerned, because several people have recently walked right into the path of oncoming trains, while paying attention elsewhere.

Why is it the government's job to protect people from themselves?


Distracted motorists routinely kill and maim innocent bystanders... it happens all the time! By contrast, the pathetic distracted pedestrians usually only put themselves at risk. Adults should have the freedom to weigh the potential benefits of an activity against the potential risks, and make a decision on whether they want to tolerate the risk. "I want to stare at my phone while I'm walking about. Yes, I might walk into an open manhole, or into the path of an oncoming train, but I'm willing to accept that risk." (By contrast, you have no right to say, "I want to text while driving. Yes, I might kill an innocent bystander, but I'm willing to assume that risk.")

Well said! The futility of even trying to protect people from themselves is insane, I can't understand why well meaning people in some government offices even try.

I've been meaning to watch that movie for a while but haven't got around to it. I don't think I'd be able to convince my wife that it's a "chick flick."
Thanks for the reminder, I'll try again soon.