I've been moved, as I'm sure you have, by the unfolding disaster in Japan. First, they have a 9.0 Earthquake, which triggers a tsunami, followed by massive power outages and an ongoing nuclear disaster at several of their power-generating reactors. As one who has only seen Japan from a distance, and on TV and in the movies... I can't help but wonder, what's keeping Godzilla at bay?!!

Those people amaze me. First of all, I'm amazed that so few buildings toppled in such a huge quake. Their strict earthquake-resistant building codes are obviously very effective. I believe much more damage was done by the water, than by the quake. Second, I'm amazed at how downright civilized they seem to be! If such a disaster hit Los Angeles, lawlessness would reign supreme, and it would be "survival of the fittest." (Or maybe not. Maybe I judge my fellow citizens too harshly. I hope we never have to find out!)

I happened to see and grab this amazing photo of a cyclist amid the ruins. His bicycle is still providing mobility. 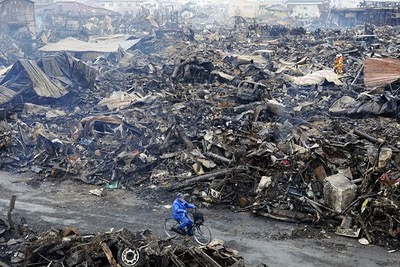 I'm a practicing member of the Church of Jesus Christ of Latter-day Saints, or "Mormons." We are strongly encouraged to be prepared for disaster. Our leaders advise us to maintain a store of food, water and other essentials. At the very least, we should have a "72-Hour Kit" containing food and water, first aid, medications, some cash - everything we would need to maintain life and health for 3 days. (You would do good to heed that same advice, no matter your religious persuasion!)

Perhaps it's because transportation isn't vital to staying alive, at least in the short term, but very little is said about "disaster mobility." That bothers me a bit. We should think about it. Could we still get around if the roads were buckled and crumbled? How about if the fuel supply were cut off? I take some comfort in being confident I could still get around following almost any type of disaster, at least in the short term. I could forage for provisions, or get to the river for water.
Posted by Bikeboy at 11:52 AM

That is something I need to get better at.

Yeah, Clancy. In a way, I felt like I "had this one coming" in the sense that the bike was outside and unsecured. (And in today's society, if you can cart something off, it's yours apparently.)

I'm going to go look at the bikes at the Impound lot; maybe it will have showed up. If I never see it again, I'll have fond memories, and I've got to admit I got my money's worth out of it. (Although I did a fairly extensive overhaul just last summer. Oh well...)

Admittedly, I'm in a little different situation living in a developing country. We always have a bag packed with passports, shot records, school records, and bribe money handy in case of emergency. We're encouraged to keep our gas tanks over 3/4 full and cell phone (and ham radio in my case) batteries fully charged. In addition to that, I keep both bikes and my BOB ready.

There have been a few instances where I've ridden into a traffic jam, only to discover that the cause of the jam was a demonstration. I simply hopped a curb and headed away from the burning tires and riot police. Motorists, on the other hand, remained incarcerated in their steel cages at the mercy of everyone around them.

Sorry about your bike, BTW. Bike theft should be a capital offense.

Sorry to hear that you had another bike stolen but relieved that it wasn't your new Cannondale.

I appreciate the sympathy regarding my stolen "beater bike." Yeah, it's a somewhat bitter thing... but I could replace it for $100. (I'm keeping a pretty tight hold on the "new" Cannondale!)

If the Peugeot doesn't find its way back to its rightful home, I'll probably find a suitable replacement - most likely on the craigslist at the end of "normal people riding season" when prices are super-low.

Everything's relative. Scott's viewpoint is very interesting. I just recently heard of a guy in the Dominican Republic who was shot dead - for his bicycle!

I suspect you read about the guy getting shot for his bike because it's an unusual amount of risk-to-benefit for a robber. Sadly, carjackings are not unusual enough to make the news.

In South Africa, Mexico City, and a few other places, diplomats are prohibited from bringing in cars over a certain value because it makes them a target for criminals.