As I advocate for bikes-as-transportation, it's only fair to compare my preferred mode with other modes. Ya never know - other modes of transportation might be improving in an ever-changing marketplace.

Yesterday I commented on the resurgence of gas prices, just as the economy seems to be picking up a little traction. NOT good for the lowly single-occupant-vehicle driver.

According to a survey by INRIX (?), 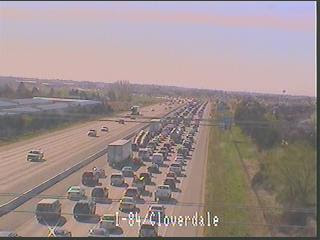 traffic congestion was up 11% in 2010. The situation will continue to deteriorate "as the economy improves and more people get behind the wheel to get to work."

According to the story in USA Today, traffic congestion peaked in 2007, after miles-driven rose 21% from 1995 to 2007. But now it's once again approaching those 2007 levels. In some places - small metro areas (like Boise?) - it's already the highest it's ever been.

On those rare occasions when I find myself behind the wheel and in traffic, my frustration at the situation is tempered by my relief that I don't deal with it very often. Seriously, I don't know how they do it - those people who live out in the suburbs and drive in to work in a moving parking lot, 5 days a week. That would drive me nuts! I love my bicycle!

You know what they say about sled dogs... "Unless you're the lead dog, the view never changes."
Posted by Bikeboy at 12:51 PM

When I hear someone say how bad traffic is, I comment back that "they are traffic".

Good point, Clancy. You hear all the time, "Why don't they do something about this traffic?" Who's "they"?