I had to replace my ancient fanny pack. My old one was a Kelty... as is the new one. It has a unique feature that I've grown totally dependent on; it will expand into a lightweight backpack, for when I find myself with an unanticipated burden.

The new one is the "Cardinal" model. It has features I may or may not use, like 2 water bottle holders, a shoulder strap (besides the backpack straps), 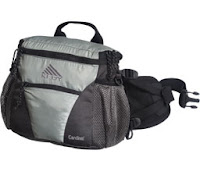 etc. And it doesn't have the capacity of the old one. (Actually I believe I like the old one better. It was very basic, but did its job well. I bet I've been using it for 15 years. It had faded from black to ugly gray... and the zipper has been failing for probably 2 years.)

I bought the "Cardinal" from an outfit called Backcountry Edge. I mention them because their price was BY FAR the lowest I could find (and I search diligently!). And their service was very quick and efficient. Recommended merchant.

Some cyclists use a courier bag. Some have the panniers, or a rack with a "trunk," or even a throw-over garment bag, to haul their stuff. I've eliminated all but the most essential stuff, and am able to squeeze it all into the fanny pack. M-F you will find me hauling a sack lunch, a small (Altoids-size) digital camera, an MP3 player and earbuds (just in case), a tube of lip balm, a pen and note pad, and a knife. (Sometimes my jacket takes the place of the sack lunch on the way home, this time of year. And the expandable backpack is invaluable, a time or three each month.)

I ride the elevator at the office with people who are lugging two large, bulging briefcases. Or even some folks with a courier bag, a large purse, and a roll-behind big ol' suitcase-looking thing. And I can't imagine having to have all that stuff in both places, each and every day! Wow! Some of 'em probably can't drive an economy car, because it doesn't have enough room to haul all their stuff back and forth from the office!

(I'm a computer geek by trade. And occasionally I have after-hours stuff to do. But fortunately I'm able to sit down in front of a computer at home and access essentially everything I can get to from my desk at the office.)

While on the topic of "stuff," I present the enlightened wisdom of the late George Carlin:

A house is just a pile of stuff with a cover on it. You can see that when you're taking off in an airplane. You look down, you see everybody's got a little pile of stuff. All the little piles of stuff. And when you leave your house, you gotta lock it up. Wouldn't want somebody to come by and take some of your stuff. They always take the good stuff. They never bother with that crap you're saving. All they want is the shiny stuff. That's what your house is, a place to keep your stuff while you go out and get...more stuff!

Sometimes you leave your house to go on vacation. And you gotta take some of your stuff with you. Gotta take about two big suitcases full of stuff, when you go on vacation. You gotta take a smaller version of your house. It's the second version of your stuff. And you're gonna fly all the way to Honolulu. Gonna go across the continent, across half an ocean to Honolulu. You get down to the hotel room in Honolulu and you open up your suitcase and you put away all your stuff. "Here's a place here, put a little bit of stuff there, put some stuff here, put some stuff--you put your stuff there, I'll put some stuff--here's another place for stuff, look at this, I'll put some stuff here..." And even though you're far away from home, you start to get used to it, you start to feel okay, because after all, you do have some of your stuff with you. That's when your friend calls up from Maui, and says, "Hey, why don'tcha come over to Maui for the weekend and spend a couple of nights over here."

Oh, no! Now what do I pack? Right, you've gotta pack an even SMALLER version of your stuff. The third version of your house. Just enough stuff to take to Maui for a coupla days. You get over to Maui--I mean you're really getting extended now, when you think about it. You got stuff ALL the way back on the mainland, you got stuff on another island, you got stuff on this island. I mean, supply lines are getting longer and harder to maintain. You get over to your friend's house on Maui and he gives you a little place to sleep, a little bed right next to his windowsill or something. You put some of your stuff up there. You put your stuff up there. You got your Visine, you got your nail clippers, and you put everything up. It takes about an hour and a half, but after a while you finally feel okay, say, "All right, I got my nail clippers, I must be okay." That's when your friend says, "Aaaaay, I think tonight we'll go over the other side of the island, visit a pal of mine and maybe stay over."

Looks like a good one! I'm a lover of my Symbiot "Sportback" pack, which rides high on the shoulders. Probably has a similar capacity to your new one, from the looks of it. I'm also a fan of travelling light.

Danielo... I can remember you were enthusiastic about that Sportpack; thanks for reposting the name of it. (It certainly is a departure from the norm. No wonder you like it! hahahaa!) (That's intended to be a sincere compliment!)

When I am on my Xtracycle- space is no worry. When I ride another bike, I have a small bag that barely fits my lunch that gets slung over the handlebars.

As long as we are talking about gear, I am looking for a new bike jacket that is waterproof and breathable. I am thinking of something like this- http://www.bicycleclothing.com/Waterproof-Breathable-Rain-Jackets.html

Clancy, I been using a REI (Novara) brand rain jacket and pants. They worked well for a few years but now seem to have lost their water-resistance. I think that I might have caused the problem by washing them too often. Since we don't get much precipitation I'll probably try to make do as good-quality replacements are expensive.

I'm at the end-stages of wearing out a Gore-tex jacket that I bought probably 8 years ago from Nashbar. I think I paid $90 for it on sale. (It looks VERY similar to the one Clancy is pointing us at.)

Waiting in the wings is a Nashbar "Premium Rain Jacket" (NA-PJK) that's on sale for $60. I bought it 6 months or so ago; haven't pressed it into service yet. It's supposed to be waterproof AND breathable; we'll see. (I've bought a couple other such items over the years, and the breathability has never been quite as good as the brand-name Gore-tex.) I bought it in the Hi-Viz color, since visibility is of critical importance, no matter the weather, but especially in jacket-wearing weather (cold and/or precip).

Can I just say that I *really* want to comment but I have way too much necessary stuff?