The Lamborghini bike - so tempting!

Way back last April, I mentioned the Lamborghini road bike. It continues to pop up on the radar from time to time.

(Back then, Clancy pointed out that you can buy a naming license. There are also Cadillac bikes, Jeep bikes, etc. I remember being disgusted when I saw Harley-Davidson Cigarettes. Dunno if HD butts are still on the market or not.)

The specs look pretty exotic. It's got a "custom tube frame." It's "light and sleek." 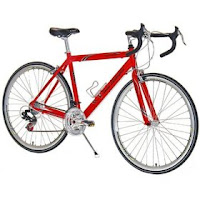 (I can't see where the actual weight is specified.) It even has a kick stand, standard equipment! And since it's blood-red and is a Lamborghini, how can you go wrong??? See it HERE.

I love the comments from buyers. Mixed reviews; owners either love it or hate it.

"I bought this bike 3 months ago and I haven't had any major problems with it. I ride it a couple of miles daily..."

"On the third day, had to change the deilures (they arrived bent +$30). In 8 months I've replace the back innertube 10 times at least (+60). Had the bike tuned (+60). The bike is really heavy and the components are cheap. The shifters seem cool until you realize that you cannnot add aerobars to place your body in a race triathlon position." (That's some FUNNY stuff!!! Especially the part about adding "aerobars"!)

"I assembled, tried it, disassembled it and returned back. [...] This is by far the worst bike I've ever ride."

"This is a good road bike. I own it for a couple of days and already love it. When it comes to bikes I know the good one just by seeing it and riding it. Gear shifting is a little bit of a hassle at first, but once you get used to it (and it breaks in) it is working fine. ... Lamborghini name on it says a lot, though it's made in China."

"I purchased three bikes for me and my sons. I've been riding bikes since I was 10 years old. I know about bikes very well. I had many bikes, but this one is the worst I ever had."

You know, there's a point where "Hey, maybe that will get more folks into cycling" runs into "That bike is such a piece of junk that it will only turn people away from cycling". This bike seems to be at that intersection.

I've not heard of those Shimano components. Where ARE the shifters? I cannot see them in the photo...

How about a expensive Ferrai MTB...http://www.toysrus.com/product/index.jsp?productId=3166791 A little pricey for any level of bike.