I'm not sure that society is better off, as a result of that particular development. (But admittedly I'm one who loves to put distance between myself and the phone!) 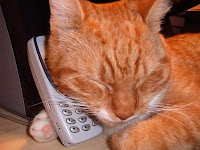 patients who hold a phone jammed up to their ear for 12+ hours a day? How about "Bluetooth Cauliflower Ear"? (I see people - almost exclusively men - walking around with one of those little Mister-Spock earpieces. Sometimes they are twaddling; other times they are silent. I guess it goes on right after the necktie, and comes off just before the necktie.)

There is no question that they have made our roadways more dangerous. Jay Leno said it best last night,

in recalling that anniversary. "The first conversation lasted for 30 seconds. And then the car ran into a tree."
Posted by Bikeboy at 8:52 AM

Cute kitty. By the style of the cell phone this photo must have been taken a few years ago.

A recent study showed that about 80 percent of all accidents were caused by driver distractions such as cell phones so undoubtedly their use while driving is making the streets more hazardous for cyclists.

I carry a deactivated cell phone for emergency use and we have one in our car for the same purpose but otherwise we don't use them.