New year - why not new saddles?

As a new year commences, I'm giving my back end a sweet bonus!

A benefit I enjoy at work (funded via another government program) gives me up to $240 per year to spend on bicycle bits and maintenance.  I used about half of my 2014 allotment recently to purchase a new saddle - a Brooks Imperial.  It's my first experience with a Brooks saddle, although the Anatomica is similar in concept.  Since everything I've ever heard about Brooks saddles is positive, that's how I anticipate my ownership experience will go.

So - my saddles played musical chairs.  I installed the Brooks on my primary bicycle - the Cannondale skinny-tire bike.  The Anatomica came off the Cannondale, and took the place of my "beater" bike's $15 Nashbar Inquisition-Torture saddle, that I've been riding on for a year or so.  (I believe they used that last-mentioned saddle as part of their terrorist interrogation regimen - for the really hard cases that wouldn't break with just the water-boarding.  It's all in the report.)  (But seriously - that saddle would probably work fine for some tailbones - it's all in the fit.  And it didn't fit me very well.  The leather "hammock saddles," like Brooks and Anatomica, are more pliable, so they'll fit more tailbones... or that's the theory behind 'em.) 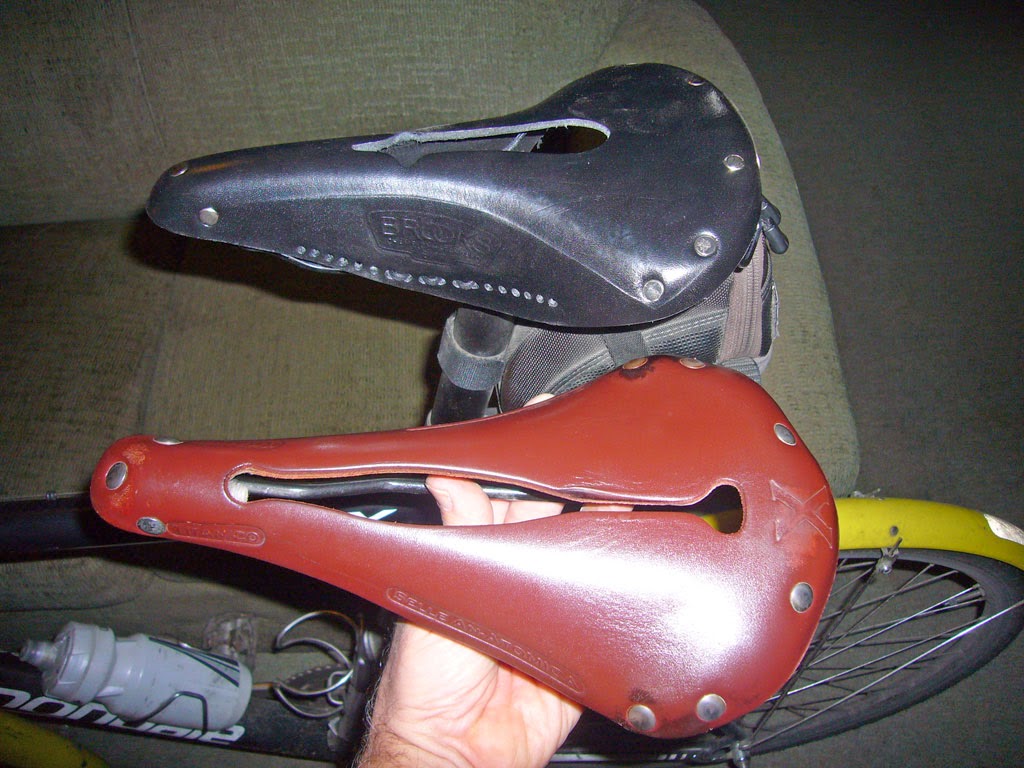 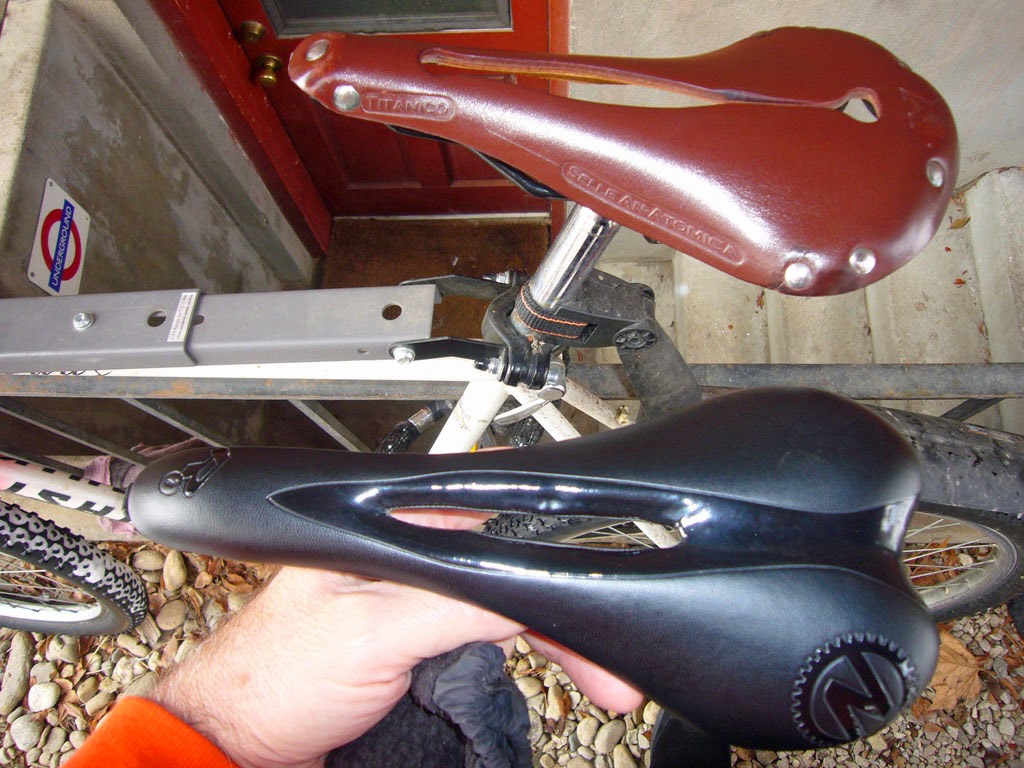 I actually swapped the saddles a few days ago - as of today I've got 40 or 50 miles on the Brooks, and maybe 20 on the "beater Anatomica."  The Brooks will be fine - I can already tell.  It feels different - it's probably an inch shorter than the Anatomica, and they require a bit of "breaking in."  And the Anatomica on the beater bike has brought HUGE relief.  The last day on the Nashbar saddle was within the past week, and the 10 miles I rode was an ordeal.  The very next day, after the swap, a 10-mile ride was significantly more comfortable.

A note about durability... I'm on my third Anatomica saddle, the first two having broken.  After the second one broke, I exchanged messages with the company.  The company president told me, "11K miles may be the limit of our saddle, given your size and riding style."  That's a bummer!  (They claim they've changed the steel rails... and I sincerely hope that'll improve things.  My current saddle has been problem-free for just over 9500 miles.  But both of the others worked perfect until they day they went "snap"!)  I have no expectations that a Brooks saddle will last a lifetime - like 75 or 80 years - but it has a 2-year warranty and claims "this is a product for a lifetime."
Posted by Bikeboy at 12:39 PM

I have several Brooks that I have acquired both new and used. Thankfully i have yet to experience a broken rail. My brother did on his Imperial and he thinks the seat post clamp may be an issue.

Clancy's brother here. I was using the Velo Orange seatpost to get a bit of layback. Others have reported the sharp edges or short clamping length may have been the issue on the rails. I also had the Imperial, but may switch to the standard B17 on my next go around.