I saw a story a few days back, reporting on the ongoing conflict between an "affluent Eagle subdivision" that's balking at the prospect of a public bike path being developed adjacent to a few back yards. (I've posted on it numerous times... it's essentially a repeat of the "Riverside Village" debacle. The developer agrees to provide a public bike/pedestrian path as a condition of development... then the homeowners want to back out.)

The most recent story says, "The Laguna Pointe Homeowner's Association recently hired a private contractor to clear a new pathway near the Boise River and away from the homes. Construction on the path was completed on Wednesday. The cost was approximately $4,000. Members of the HOA hope the city will develop that pathway and give up plans to seize the current path now in use." I was curious enough, and the day was beautiful enough, that I decided a personal observation trip was in order.

Here's where the "new pathway" begins, at the east end - the Boise end.  The "traditional" disputed path is on the left, the new one on the right. 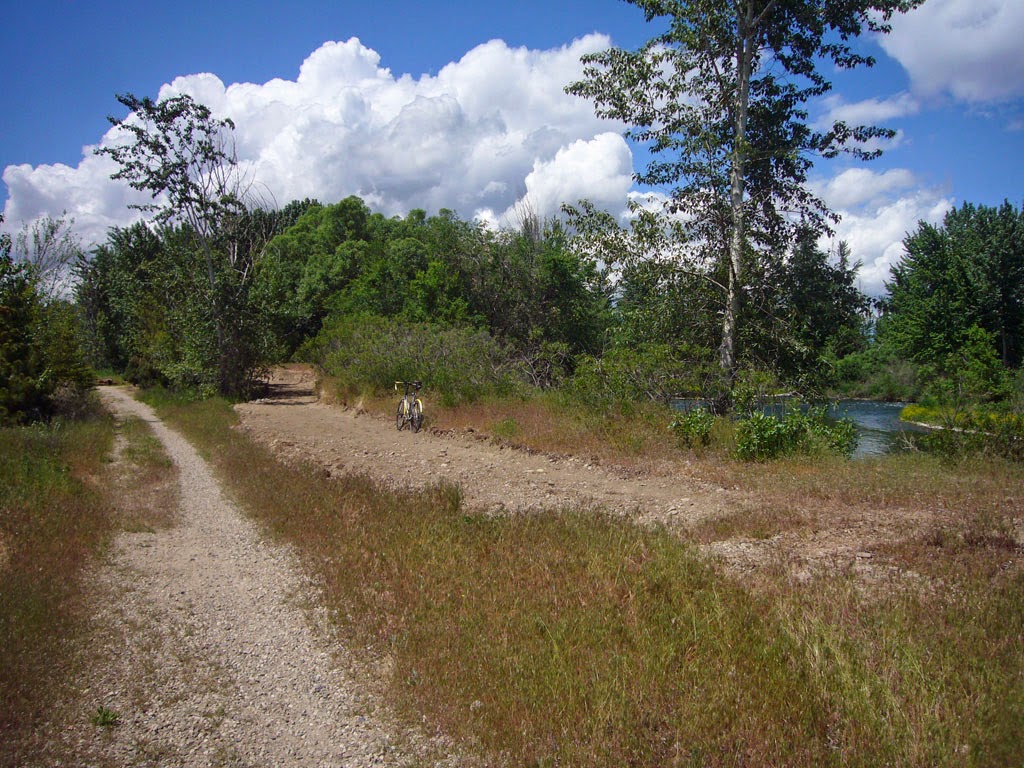 It's extremely loose, dusty dirt as of today... I had to walk my bike for the first couple hundred feet.  But it gets better... and that problem is easy to fix.

The route isn't a bad alternative, frankly.  Closer to the river and farther from the palatial estates - what's not to like? 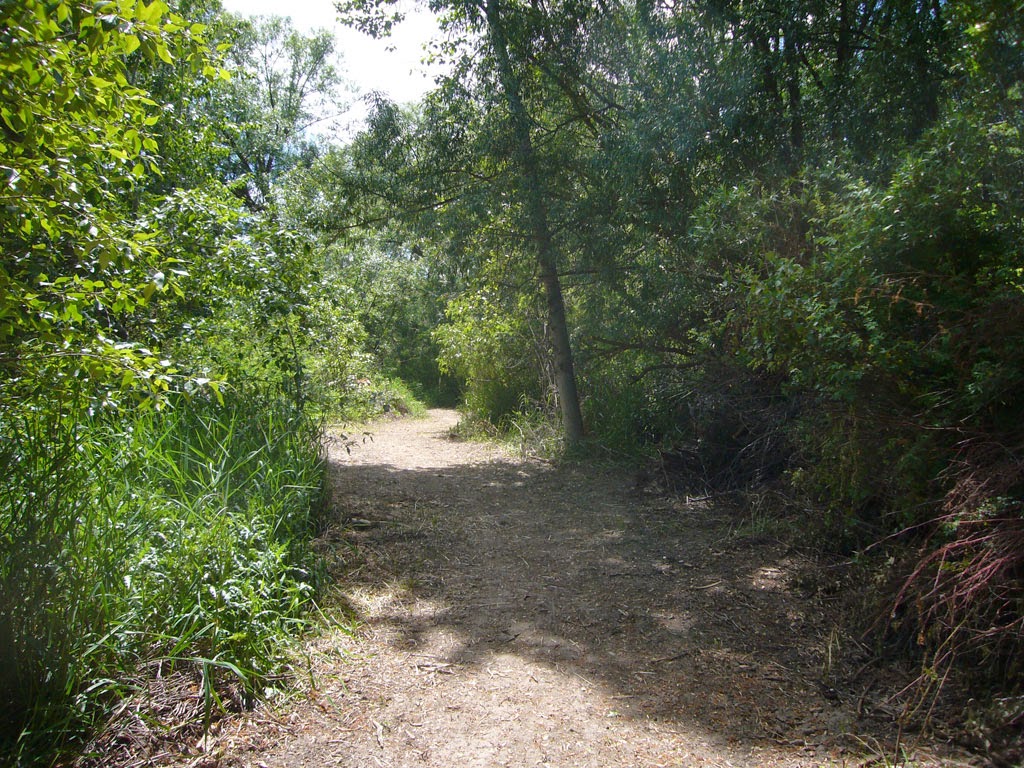 Except... eventually it merges back into the traditional path, just before where it crosses the flood overflow canal.  And - the stout plank that replaced the destroyed bridge has been removed. 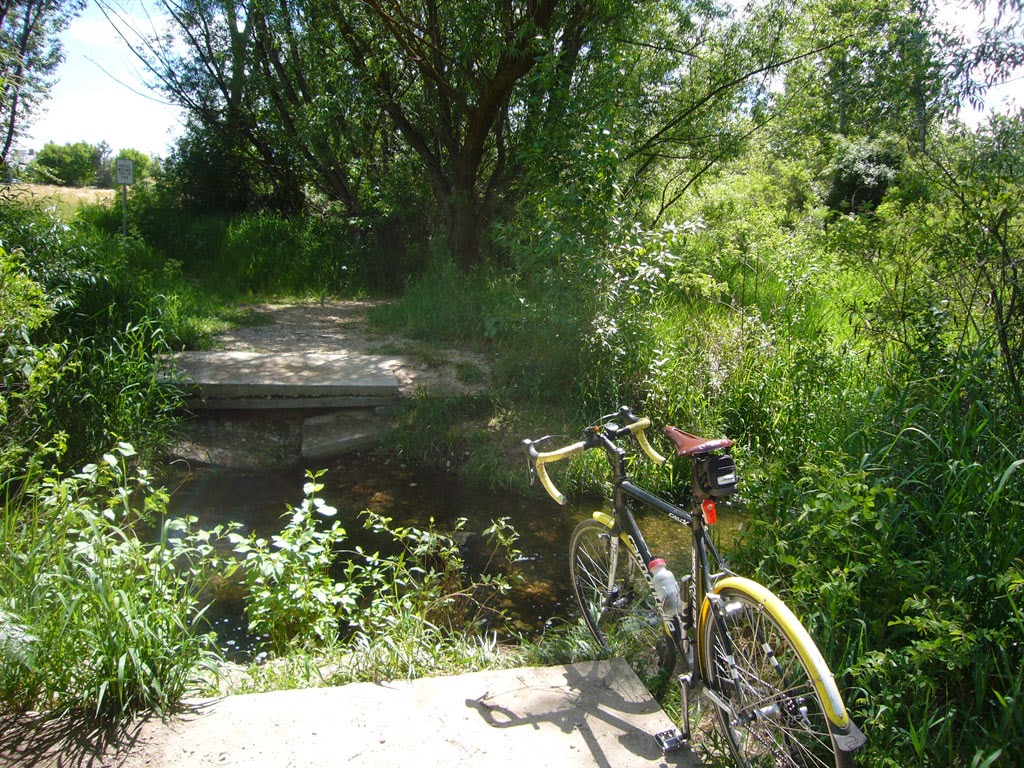 I had the choice of either returning the same way I got there... or fording the canal.  The socks and shoes came off.

The rest of the path remained unchanged from previous visits, over the past year or so.

I rode north a half-mile or so on Eagle Road, and then headed back in on the north side of the Boise River... my reward was several miles of well-maintained dirt paths mostly, and lots more very nice scenery. 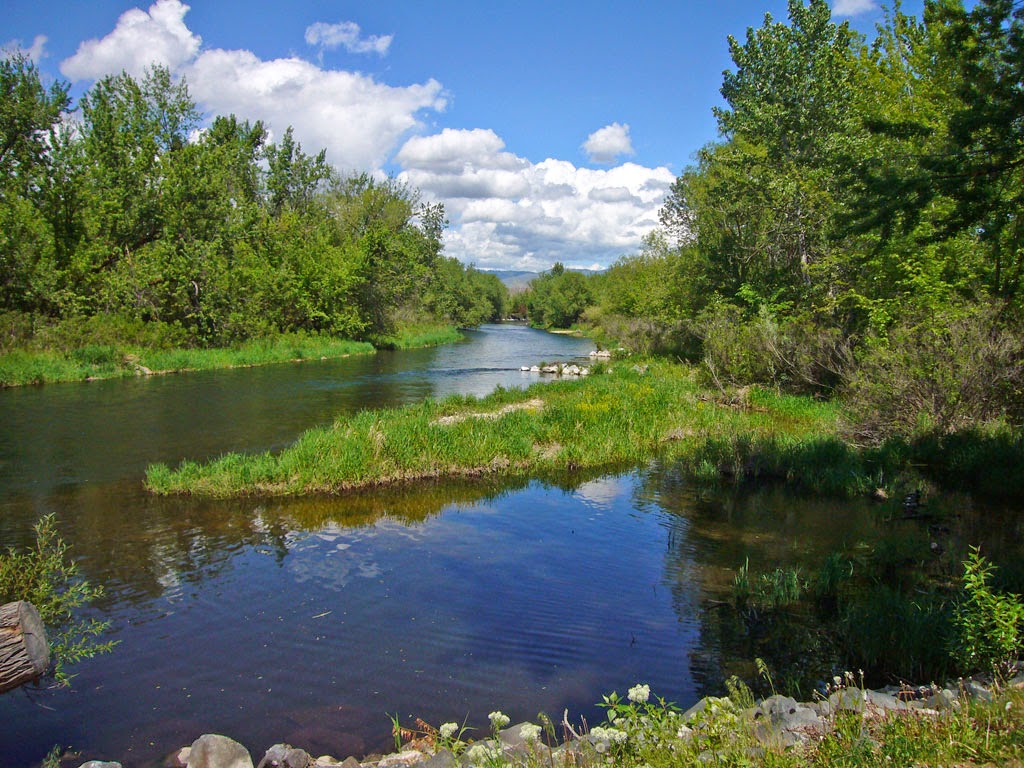 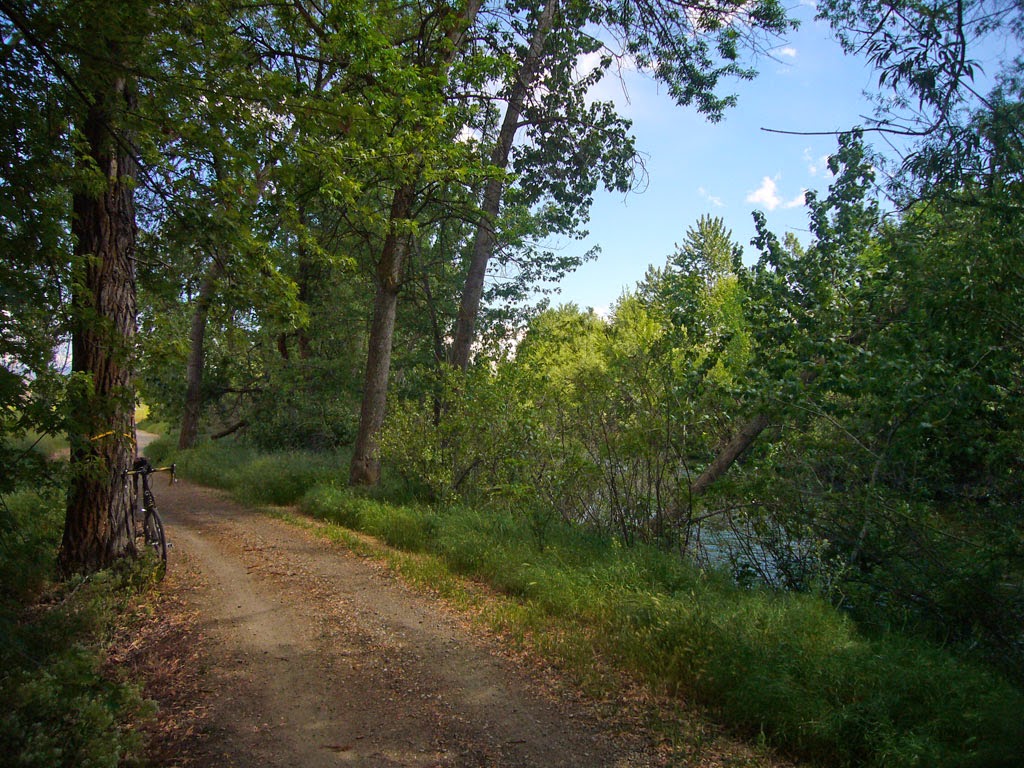 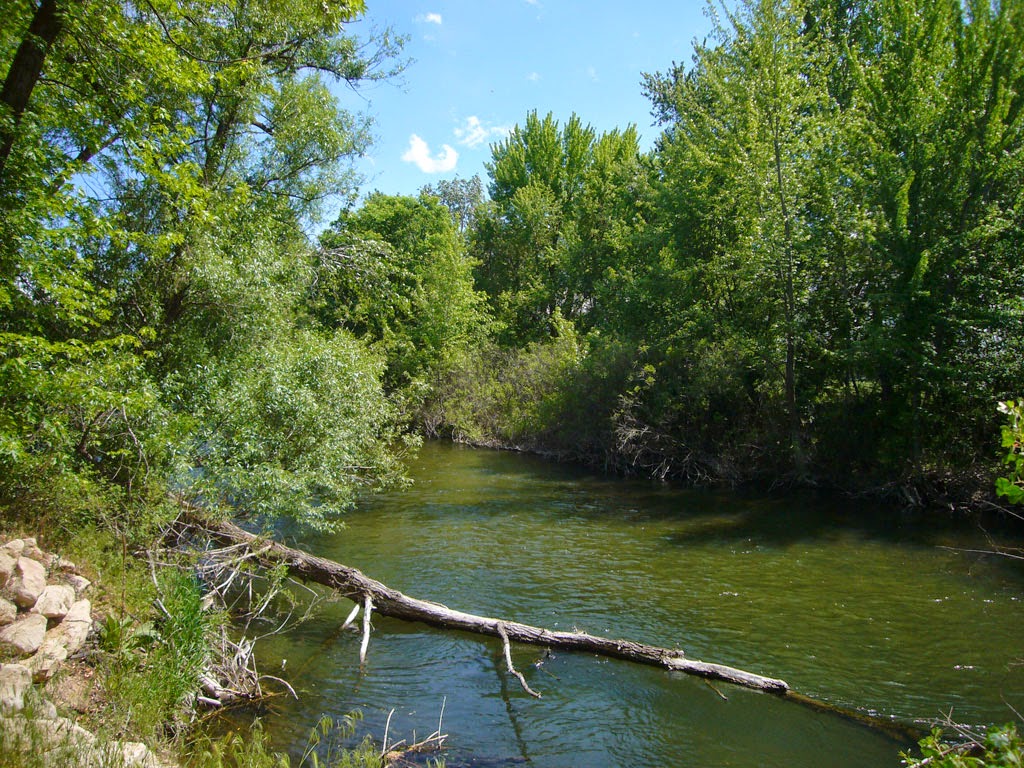 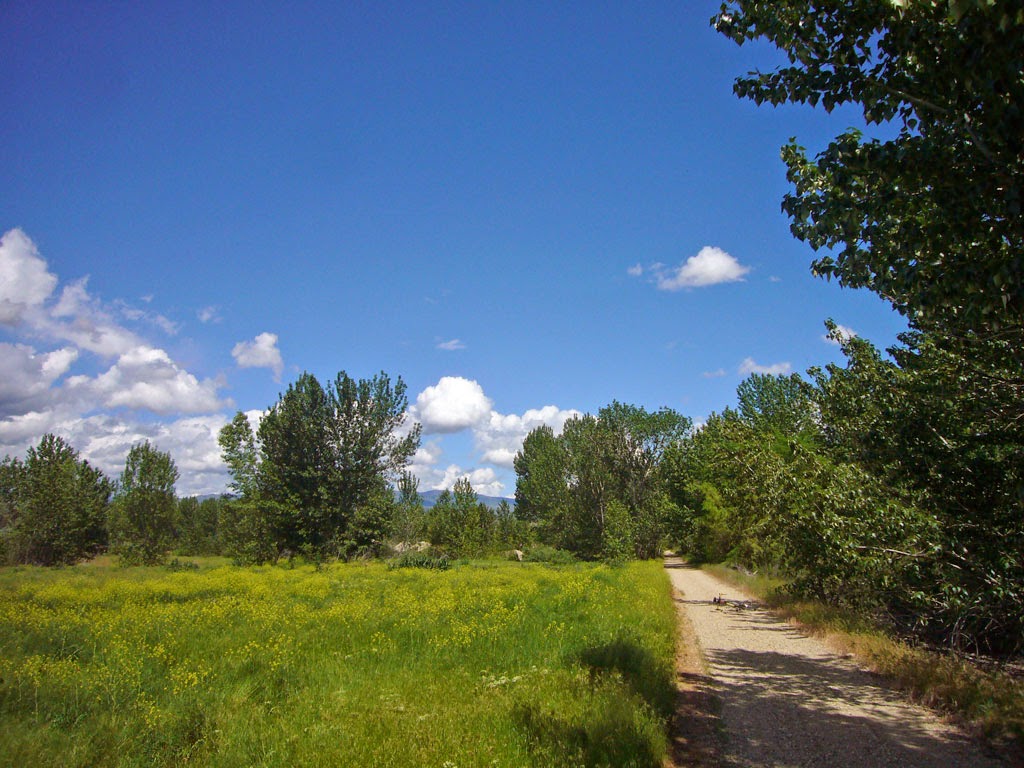 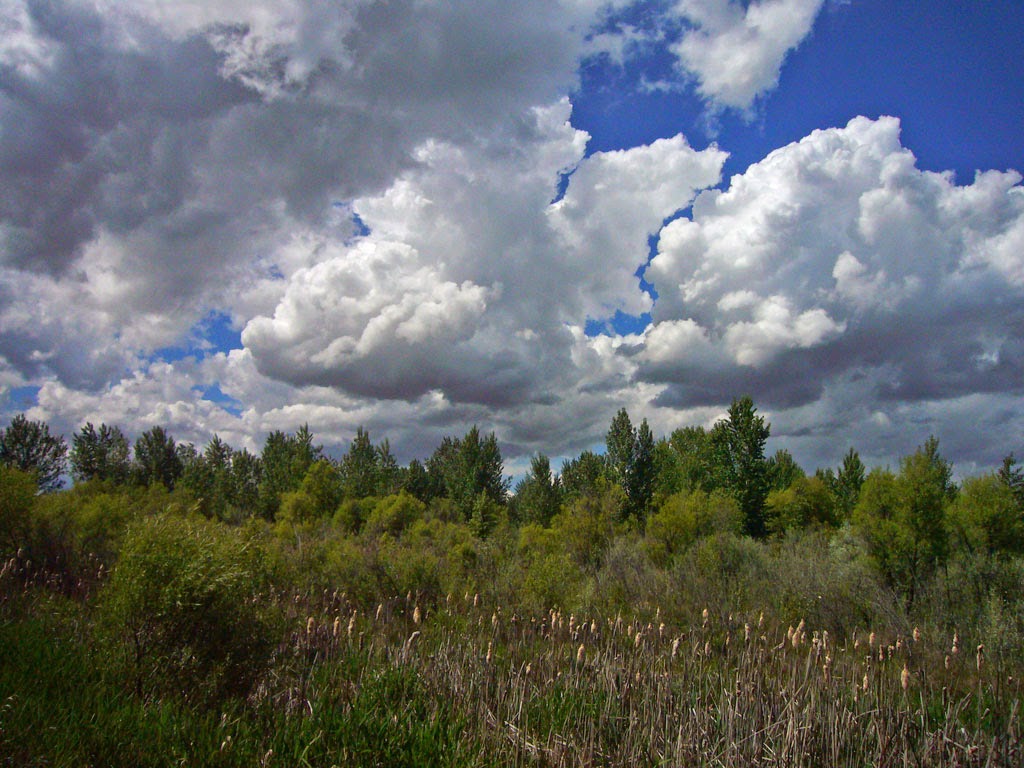 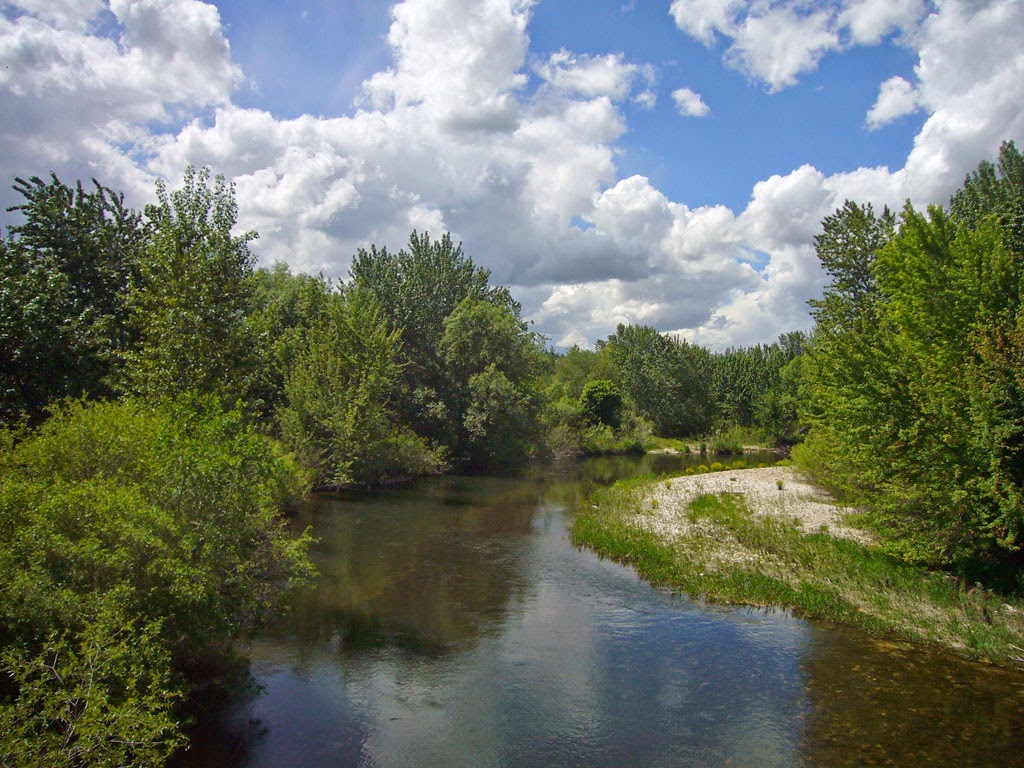 (And of course I was compelled to take to the streets, when I arrived at the exclusive Riverside Village "nature path.")

It's about 10.5 miles, round trip, starting and finishing at the Glenwood Bridge.  There are a couple tricky places - forks in the road and such - where it helps to have ridden it before.  And I'm guessing that 6 of those 10.5 miles are dirt/gravel surface, generally quite well maintained.  (It may be marginal for super-skinny high pressure tires.)  But if the weather is nice and you've got some time, I recommend an exploratory adventure out that way.

It's a shame that the public status of this pathway will likely be mired down in legal limbo for the foreseeable future.  But I've done the round trip 4 or 5 times now, and have ridden west to Eagle Road at least that many more times, and I've never had a confrontation with anybody.  Hopefully your results will be similar.
Posted by Bikeboy at 10:44 PM