Okay - this is pretty remarkable.

According to a U.S. Census report released today, bicycling to work has seen a 60-percent increase over the past ten years.  But even cooler from a local standpoint... Boise, Idaho is listed as the #4 "large city" with the highest percentage of transportation cyclists, at 3.7%.  Portland is #1 at 6.1%, and Minneapolis and Madison, WI, are both ahead of us... but we have more cyclists per capita than such traditional cycling cities as Seattle, San Francisco, and Tucson.  (Nationwide, the Census people say 0.6% of people use bikes to get to work.) 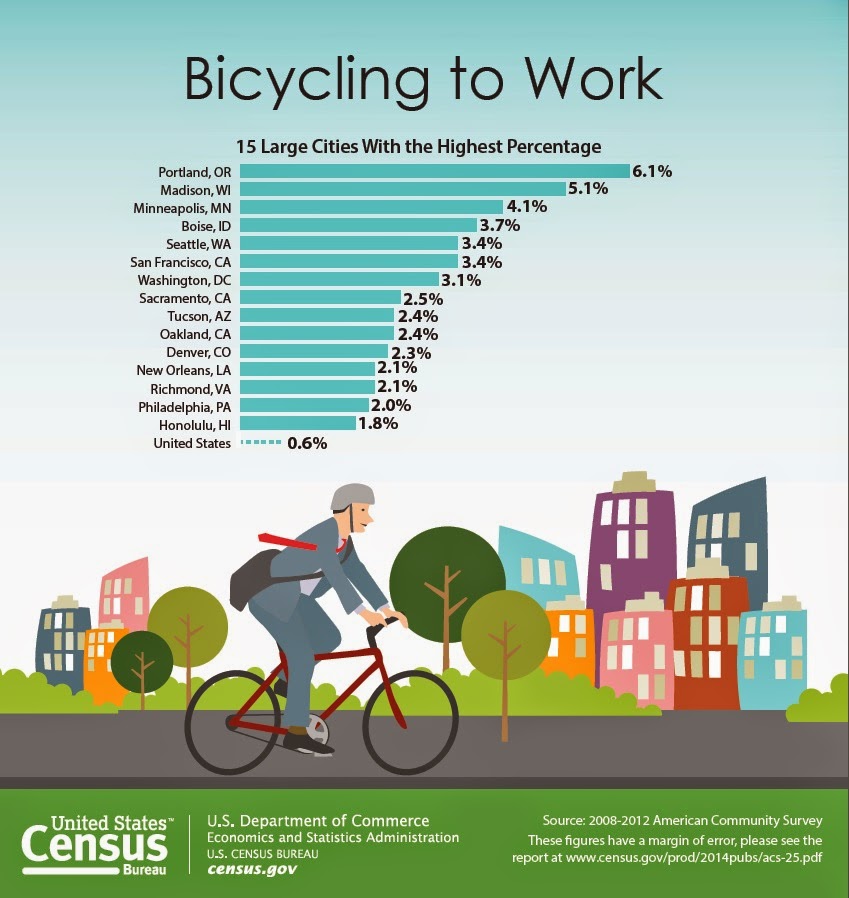 Why the uptick?  Here's my "expert analysis" (nudge-nudge, wink-wink):
- Gas is considerably more expensive than it was 10 years ago.
- Despite suggestions to the contrary, the economy is still pretty stagnant; people have to economize.
- The young adults of 2014 don't have the same perception of a fancy single-occupant vehicle as their parents did.  It's no longer an essential symbol of status and "success."

I expect bicycles-as-transportation will continue to become more popular over the next ten years.

I sure don't know why not!

Think about it - the weather and "geography" of Boise are more bike-friendly than those of Portland or either of those Northern-Midwest cities.  We get less rain than any of them... a lot less than Portland.  Our winters are shorter and milder than Minneapolis or Madison winters.  And our terrain is relatively flat.

More and more, the local administrators seem to be willing to provide accommodations for casual or timid cyclists... witness the month-long test project downtown.

What's working against us?

We are lacking in education and enforcement.  There are still too many idiots-on-bikes who either don't know how to use the public roadways, or are willfully disobeying the rules of safety and common sense.  And as long as there are no consequences, that's unlikely to change.  (As the percentage of cyclists increases... MAYBE "peer pressure" will have a positive impact.  If just one guy is hollering "Wrong way!" at the against-traffic cyclists, nothing will change.  But if they get hollered at every block or two, maybe they'll take notice.)

Boise Bike Week starts this Saturday!  I believe we have good reason to celebrate, now more than ever... pick out an event or two or five to participate in. I'd suggest the Pedal Power Parade on Saturday 5/17.
Posted by Bikeboy at 8:48 PM