Movie star busted for no bucket in Australia

Robert Pattinson, who's been in the "Twilight" movies, is in Australia on business. (I wouldn't know him from Adam.)  During his down time, he apparently went bicycling wearing a backwards baseball cap where a helmet should've been. A photograph showed up in the local paper, and the local authorities contacted him and warned him about the bike-helmet law. 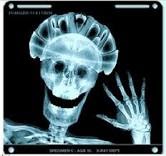 He wasn't fined (standard fine is $90 Australian), but if he doesn't heed the warning, next time they'll throw the book at him!

Interestingly, Australia also imposes a $60 "victims of crime levy" when you violate the law. Would that apply to not wearing a helmet? If you drive inattentively, you could obviously victimize somebody... but if you fail to don that bucket, who could possibly fall victim, other than yourself?


I'm pro-helmet! I always wear one. If I ever had the good fortune of going to bike-mecca Amsterdam, where nobody wears a helmet, I'd wear one, even if it stuck out like a sore thumb. (My philosophy, for both bicycles and motorcycles: "If you use your brain, wear a helmet. If you don't use your brain... well, it's probably not that important.")

But shouldn't grownups be free to weigh the pros and cons, and make that choice for themselves? Even if Pattinson is a movie star, he probably has some "smarts" - let him decide if he wants to accept the risk of riding with that fashionable backwards ballcap!