Are you in need of a replacement saddle, or one that's kinder to your back end?  If so, Selle Anatomica is offering their original "Titanico" for $99, through the end of 2012.  The MSRP is $190.

This seat came as standard equipment on my Cannondale touring bicycle, and was immediately my favorite seat ever. 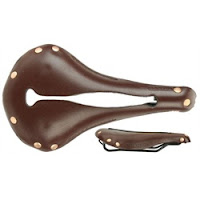 The Anatomica is similar to the more-famous Brooks saddle in that it's a thick leather seat suspended hammock-like on the frame.  It has some additional design features that supposedly make it even more butt-friendly, specifically the distinctive "slot" that lets each side flex more independently as you pedal along.

I wrote about it, and saddles in general, HERE.

Much to my chagrin, the original Anatomica saddle broke!  I wrote about that setback HERE.  To the company's credit, they replaced the original saddle with a spankin' new one, even though I had slightly passed the 1-year warranty period.  And the replacement is still going strong, 20 months and almost 11,000 miles later.  At this point, I'm convinced that my problem was a freak "defect in materials."  (The lady at the company said they had several that broke - she speculated they must've gotten an inferior batch of steel that they used to form the rails.)

The Titanico and Titanico X (for riders 190-280 pounds) are both available at the sale price, in Mahogany (brown), Graphite (gray), Red, White, or Pink.  (Pink!  Sweeeeeeet!)  I'll be ordering one before the end of the year.  I've got an old beater mountain bike - primarily my really bad-weather ride - and when I perch on its conventional saddle, it feels like sitting on a post.  ($100 saddle on a $50 bike... nice!)
Posted by Bikeboy at 8:50 AM

Very nice price. You know the leather saddle addiction starts with just one.

this looks like a bit of a bike bargain to me, i use arious sites and never seen this at this price so the find is appreicated :)