This seems a little "pie in the sky," to coin a phrase, but honchos in London want to construct a citywide network of elevated bikeways, over their teeming streets. 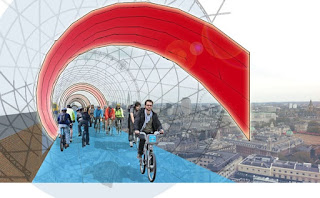 Perhaps it's more realistic than it sounds. They have an elevated railroad infrastructure - old, but still in heavy use. Apparently it needs an overhaul within the next few years, and architect Sam Martin is pitching the idea of adding the elevated bikeways. Users would pay a fee, and they also envision a corporate sponsorship to avoid asking general taxpayers to pitch in.

According to the article, "Made of steel and glass, the SkyCycle pathways would provide an above-ground path for long-distance bicycle commuters. Entrances and exits would be placed at regular intervals, perhaps at stations, and users would pay a swipe-in toll of one pound with their Oystercards. Because overhead rail links suburbs to the city and runs between London's biggest stations, such a network could serve all types of commuters."

Sounds kinda cool. Practical? I don't know. However I do know that London acknowledges it has a major traffic problem - like any metropolis of its size. A few years back, they imposed a fairly steep toll on anybody who wants to drive his car into central London. Also, it would be bad if they built it, and people got the mistaken impression that since bicyclists have their "skyway," they no longer belong on city streets.
Posted by Bikeboy at 2:09 PM

Looks cool and great idea, but the on ramps and off ramps might be difficult. I was in London about 5 years ago and I dont' remember seeing many raised railways in Central London.

we are bicycle flashlight wholesales.perhaps you really need the bike led light!