... on public roadways? Occasionally you can't help but wonder.

Yesterday I was cycling down a nice wide 5-lane arterial here in Boise. Traffic was light. I thought I was doing everything right, and probably 25 or 30 cars went by without incident. Then along comes some guy in his little 4-door sedan, and as he goes by he lays on the horn. Beeeeeee...eeee...eee...eeep!

He was looking in his rearview, so I flipped him the bird. I'm not proud of it, and I felt bad afterwards. IMO, it's stupid to respond to stupid behavior, by engaging in stupid behavior. Most of the time, I prefer to console myself by thinking, "Wow! It was nice of that inferior and marginal driver to warn me of his presence. Otherwise I might have mistakenly thought he was competent!"
(-;

I really would like to engage a guy like that in conversation to ask him why he honked. 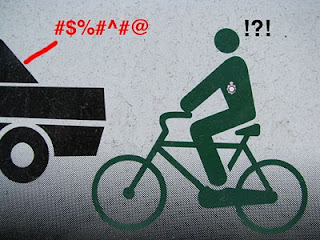 - Was I doing something dangerous or illegal? (Would the police have pulled me over, if they happened along?)
- Are you just having a bad day, and that's how you "act out"? Did somebody just honk at you for no apparent reason, so you felt compelled to honk at somebody else for no apparent reason?
- Are you bullying me because your vehicle is bigger, and "it's a jungle out there"?
- Was it a major inconvenience to momentarily lighten your foot on the accelerator, and maybe adjust your trajectory by a couple of degrees? Did I delay you?
- Do you think that bicycles don't belong on public roadways?

Would most people prefer to live in a place where bicycles aren't allowed on roadways, but only on separated recreational pathways?

Because I only get honked at maybe 6 times a year, it always bugs me. (If it happened more frequently, I'd wonder if it was on account of something I'm doing wrong. But the infrequency, I believe, attests to the fact that I'm usually in the proper place on the road, and people see me, and they can recognize that I'm doing my best to be a good roadway citizen.)

My friend and blog-reader Bob T recently sent me a link to another rider's commentary, titled "On The Wretchedness Of A Culture In Which People Get So Upset About Bicycles."

"The comment threads on pretty much any online article that has anything to do with bikes in pretty much any publication are guaranteed to be overflowing with hissy fits about cyclists, most of which can be distilled down to the complaint that bikes get in the way of cars, or more bluntly, that bikes are annoying so who cares if they get run down.

"And its not just venom being spewed safely behind anonymous computer screens. Any cyclist who’s spent significant time on the streets has no doubt experienced drivers foaming at the mouth first hand."

Bertolet describes how cars "dehumanize us":

"I say this because I can see it happen to me whenever I get behind the wheel. Egged on by the overpowering goal of getting there faster—which is what traveling by car is all about—I find myself reflexively taking all kinds of little chances that increase the risk I am posing to others around me. And that’s how most people operate. But if not enclosed in a safe metal and glass cocoon, most of us would never behave so callously toward our fellow human beings."

Interesting observations. (Many of the responses to Bertolet's column are by folks commenting on the "helmetless moron on a brakeless fixie" in the photo illustrating the piece.)
Posted by Bikeboy at 6:52 PM

I strongly suspect that most of the public believe that it is unlawful for a cyclist to ride in a way which causes faster moving vehicles to have to change velocity and/or trajectory in response to the cyclist's presence. Would you have been honked at if you would have been on a tractor or a backhoe rather than a bicycle? I think not, even though the laws governing the use of such slow-moving vehicles on public roads are very similar to the laws governing bicycles.

I believe that the fact that you are subject to honking 6 times a year instead of 6 times a day says more to the level of civility in this area rather than a general knowledge of correct cycling practices. I can attest that this general ignorance of bicycle law extends even to some members of our local law enforcement community.

Check out this video, pretty much sums it up rather nicely I think.

NICE, Mark! That does sum it up pretty nicely. Thanks for reading, and sharing.