Her name may not be as well-known as Michael Phelps, but Kristin Armstrong is bringing an Olympic gold medal home to Boise, Idaho! WOO-HOO!!!

51 seconds, almost 25 seconds faster than the silver medalist, the UK's Emma Pooley. That's about 24.5 MPH average, if my calculator is working. (A long-time hero of mine - Jeannie Longo - finished 4th at age 49!)

Kristin: "It's the most amazing day of my life... I've been working for this for the last eight years, especially the last four, and to time everything right on one day is an accomplishment of its own."

Talk about a "Hometown Girl Makes Good" story! Even the National Peanut Board congratulated her. (Kristin likes yummy peanut butter. You wannabes - listen up!)

Kristin says she wants to come home and bask in the glory for awhile, then get on with her life.

BUT - She also realizes she's become a role model and has a "bully pulpit" that she never had before. 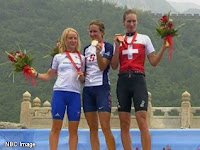 bicycles-as-transportation, and bike safety. I envision spot TV and radio commercials, with Kristin encouraging us to ride bikes, get exercise, wear helmets, go with traffic not against it, use a headlight, etc. Danielo wrote about how Kristin inspired his son with her performance and accessibility at Boise's Twilight Criterium, the last race she did before heading for China. "Thanks, Kristin, for boosting my efforts to raise a son that loves cycling. Huzzah!"

Maybe I'll get lucky and cross paths with her someday out on Hill Road... just before she drops me like a bad transmission! My brain-bucket is off to you, Kristin Armstrong!

Isn't ironic that Garden City Mayor John Evans lauds bicyclist Kristen Armstrong for her Olympic victory? Yet Kristen can't ride a bike through part of the Treasure Valley Greenbelt in Garden City. Would he prosecute her if she dared to ride her bike on the Greenbelt through Riverside Village?

Tell John Evans and the Garden City Council that it is about time that Garden City recognize that the Greenbelt is for all, not just for the Riverside Village homeowners "nature trail". If you want this to change, support the Citizens for an Open Greenbelt.

The Statesman had her on the front page, and UI took out a full-page ad congratulating her. My congrats will pale in comparison, but congrats to Kristen nonetheless!

Congratulations to Kristen on a huge victory! Now that she has the key to Garden City (as awarded by Mayor John Evans), maybe she can "unlock" the Bike Path through the Riverside Village section of Garden City.