(Thanks to reader mcarp for the heads-up.)

An article in the Wall Street Journal is quite interesting.

It reports on the successful efforts of "local gadfly" Rob Anderson to block San Francisco's implementation of their 527-page bicycle infrastructure expansion plan, until a comprehensive environmental impact study is completed. The article can be read HERE.

Actually, if you're being objective, you'll agree that Mr. Anderson has a point. If you have limited road width and want to stripe a bike lane, something's gotta give. There are thousands of such roads in 'Frisco, and realistically, the only thing you can do is to surrender motor vehicle road width.

(What else is there? The other options would be to eliminate sidewalk, or condemn and buy up roadside real estate, which is some of the most expensive anywhere.)

If you eliminate a motor vehicle lane, or even make the existing lanes a couple feet narrower, it will have an impact on other roadway users during peak hours. So from an environmental standpoint, the question is... will the addition of a bicycle lane have enough of a positive impact that it will counter the inevitable negative consequences of the loss of a car lane?

One thing that Mr. Anderson (and many bike-transportation skeptics) seem willing to ignore: in San Francisco, bicycles are legal and legitimate transportation vehicles. And as such, doesn't the city have a legal obligation to provide a relatively safe infrastructure, whether it be lane-sharing with motor vehicles or a dedicated bike lane? In nature - "big dogs rule" - the cyclists would get squished by the Corollas until a pack of Camrys shows up. They rule until a Suburban or Hummer takes 'em out. Then along comes the King-of-the-Jungle Huge Dump Truck! No natural predators! But laws are supposed to protect the little guy, in human society.

A small-scale local example of the problem might be the State Street bottleneck, from about 18th to about 22nd or so. State Street is a significant arterial, and in that area is 2 well-packed lanes in each direction. They've already expanded the roadway into the front yards in that stretch; the only way to widen is to knock some houses out of the way. I s'pose cyclists probably ride that stretch during rush hour. I've done it a time or two over the years, but it's an experience I don't relish... a bit too close to the edge for this rider. 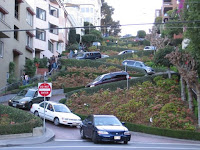 When I read (in the WSJ article) that "at least four bikers have died and hundreds more have been injured in San Francisco since mid-2006," it makes me appreciate how blessed we are here, where the roads are generally well-equipped for cyclists, and traffic (so far, at least) isn't so bad that it pushes people to desperation.

(Obvious question: Does that 527-page plan include a bike lane on Lombard Street?)
Posted by Bikeboy at 1:27 PM