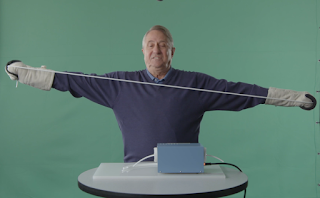 * Al Gore is one of the celebrities who has made a name for himself in the "science of global warming."  Is the globe warming?  Probably. (Based on my non-scientific observations, we sure seem to be getting "weather extremes" like never before.  But that's just personal observation.)  Previous commentary HERE.  I'd be much more likely to take Algore seriously, if his scolding were accompanied by practicing what he preaches!  If human production of carbon dioxide is indeed causing global warming, and it can be reversed, perhaps we should start by forcing Algore, Leonardo DiCaprio, Arnold Schwarzenegger and Robert Redford to give up their private jet transportation and huge utility bills, and adopt cave-dweller lifestyles.
Posted by Bikeboy at 8:33 AM