How time flies! I first posted here on January 18, 2007. (After much consideration.) Since then, I've deposited 1077 additional posts... some are throwaways, but I'm quite happy with many. "I stand by my words."  (An odd side-note about the timing... my first grandchild, Mackenzie, was born two weeks before my first post.  She just turned ten.)

I'll have to plow through all those posts, and pick out some favorites to re-share.

How has the world changed since January 2007?

Well... that was the same month that Steve Jobs stood on the stage in his denim britches and long-sleeve black turtleneck (just a guess on what he might've been wearing), and announced the first iPhone. (From a cyclists' viewpoint, "smart phone technology" was probably a big step backwards, at least in fostering cyclist safety.)

The basic bicycle hasn't changed nearly as much. Although there are considerably more variations - cargo bikes, electric-assist bikes, etc. - oriented toward the transportation. (The meter has probably moved somewhat in a positive direction, on the percentage of Americans using bikes for their commuting. But there's no denying that the price of gas is a major motivator, or de-motivator. When gas is $4, I see a lot more bikes on the roads than when it's $2.)

In the past 10 years, there have been considerable advances in automotive-propulsion technology. The Toyota Prius and Honda Insight were both around in '07, but the Prius (and other hybrid models) have become best-sellers. In addition, there are now "plug-in" electric cars, thanks to improved battery technology. I expect new, amazing and unexpected automotive technologies will continue to emerge. If people will buy it, they'll build it.

In my very first post, I declared that bicycles are "the most efficient form of human transportation ever devised." (And I referred to the people-powered bike. FORGET about electric assist, etc.)

Has that changed? You know - with all the new hybrid and electric cars, etc.? I emphatically declare NO! But I'd welcome any evidence that might prove me wrong!

Will this blog endure for another 10 years? Will your friendly neighborhood Bike Nazi continue to spout? Hard to say. I don't seem to spout as prolifically as I once did... much of what I had to say on the topic, has already been said. I sure hope to still be riding in 10 years! Maybe more, because I expect to have 40 more discretionary hours each week, than I've had for the past 10 years.

I'm very grateful to my ten or so readers (grin)... particularly I'm grateful for the 2200+ comments (Wow! About 2 per post!) you have posted over those ten years! I particularly appreciate MY FRIEND Clancy. I didn't even know him 10 years ago - but he first posted when I was about two weeks (!) into this project. His astute observations about cycling, and his good-natured devotion to it, have been educational and inspirational to me. 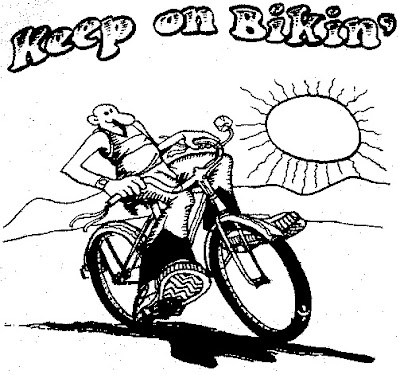 Thanks, I enjoy your no-nonsense point of view. Not only have you racked up the number of post over the year, so have you on the mileage.