I've been eagerly watching this for several years... the development of a key section of Boise Greenbelt, on the south side of the Boise River between Ann Morrison Park and Garden City (Joe's Crab Shack / Riverside Hotel area).  Because of my eagerness, it seemed to take particularly long, but except for some enhancement of vegetation along the way, it appears to be 100%... and very nice!

It is a key piece of the puzzle in our "String of Jewels" - now a person can ride a bicycle, on the south side of the river, nonstop from the Parkcenter area at the east end of town, all the way to Eagle Road on the west end.  Fantastic!  (You can go even father east, if you're on foot.)  It also adds a spur that extends to the Garden Street Greenbelt - the stretch that goes over the red trestle bridge.  I'll use that extensively going forward, I'm sure. 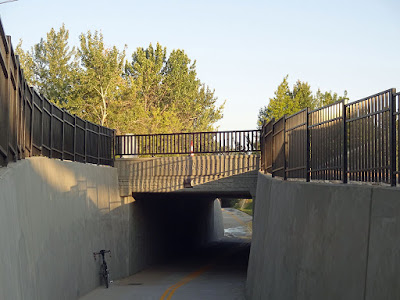 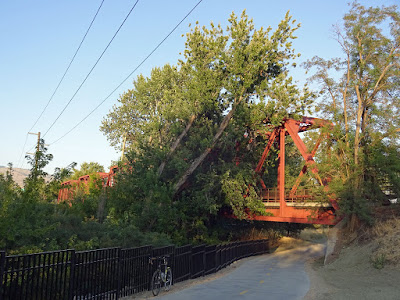 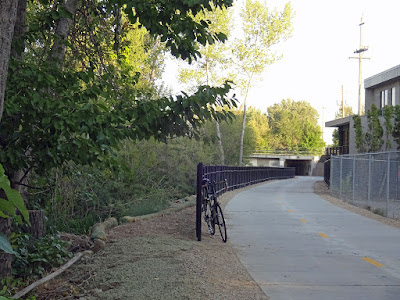 One other note... I snapped another photo just a day or two before it opened.  It's nice to see that they've finally quit discriminating against non-spellers.  For ever so long, you needed to know spelling to paint the signs on the pathway surface.  (It's good I took the photo when I did... they also obviously have a spelling-correction budget... "YEILD" has been painted over, and changed to "YIELD."  There were at least three occurrences that have been fixed.) 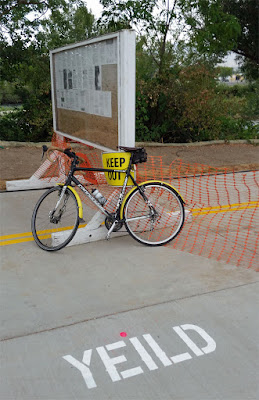 Correction! This piece does NOT complete a continuous "greenbelt" from east Boise to Eagle Road... in my enthusiasm, I forgot that there's a detour between 52nd and Remington in Garden City - just east of the Fairgrounds and abandoned Les Bois Park. It's maybe a quarter mile.
Posted by Bikeboy at 1:27 PM

Not a stretch that I will take often,but it will be nice none the less.