No - I'm not talking about presidential politics. 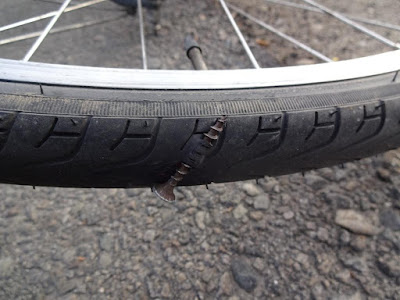 Actually I felt it and heard it before I saw it... klunk-klunk-klunk ... obviously from the back tire. Usually it's followed by the "whoosh" as air escapes the tube. After I saw it... I was doubly-mystified at no leaking air. I had to take a photo.

I took out my little keychain screwdriver and unscrewed it... and rode home. Two days later, still riding. (I topped off the tire with air this morning, but NOT because it was getting low. Only because I add a few pounds every 10 days or so.)

I ordered another year's worth of Vittoria Randonneur tires a month or so ago. I've got 3 or 4 older tires - other brands - that I really ought to put in rotation, before they crumble into dust, instead of wearing out. But I can't get excited about the notion of fixing flats; that's a rarity any more.

Dear Vittoria - do you want a spokes-model? I might be your man! I could use a sponsor. I'm a true believer... and I'm DANG good-lookin', too! (Okay, I'm lying. I'm an old fat guy. But I ride a lot of miles on a bike, and almost exclusively on Vittoria tires.)
Posted by Bikeboy at 10:14 AM

That would make me a believer. You could always donate your old tires to the BBP.