For many years, there was no place to cross the Boise River west of Glenwood Street and east of Eagle Road... a distance of 4-odd miles.  Combined with that, there have been pockets of resistance to even allowing bicyclists and/or pedestrians to use the legal easements on either side of the river, down that way.

The situation has improved noticeably this year.

A private neighborhood near Eagle has finally acquiesced and allowed cyclists to pass alongside their neighborhood, as the developers agreed to do from the beginning.  You can now ride your bike from Glenwood to Eagle Road on the south side of the river.  (Stretches of dirt path remain... it may be for the best, if it discourages the Tour de France breakaway wannabe's.)

The Riverside Village "Nature Path" remains closed to cyclists, and there's no indication that will change any time soon.  I continue to hope for an explanation about how bicycles irreparably threaten "nature," which seems much more resilient to backyard parties, lawn mowers, dogs, etc.  (And for the record, I'm mystified that I continue to encounter seemingly-healthy "nature" along areas of the Greenbelt where they allow cyclists.)

But starting this month ("officially" next week with some sort of ceremony - almost certainly attended by anti-bicycle dignitaries), cyclists and pedestrians can now cross the river, approximately halfway in between Glenwood and Eagle.  Be advised... if you're on the north side of the river, you'll take to the roads to get back east to Glenwood.  But there's a nice series of Greenbelt-like paths (some dirt) taking you west to Eagle Road.  I predict that the bridge will be very popular very quickly, particularly with folks who live in the Eagle area.

I breached a fence a couple weeks ago, to ride over the installed bridge.  On Wednesday, June 10, all pathways were open (excluding the aforementioned "Nature Path")... I crossed and took these photos.

Looking north from the south side: 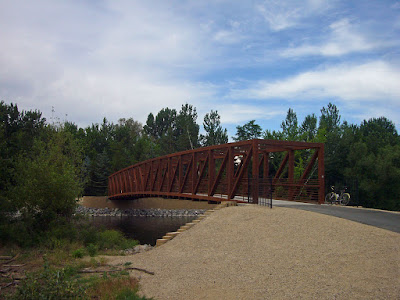 Looking southeast from the north side: 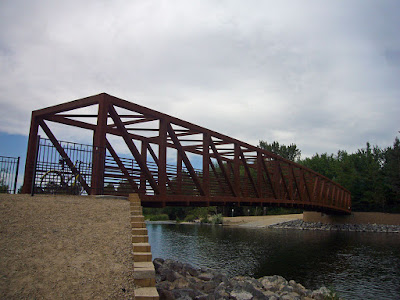 Looking east from the north side (toward the restricted "nature path"): 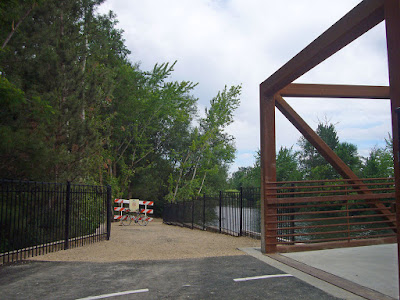 Looking east from a bit farther downstream on the north side: 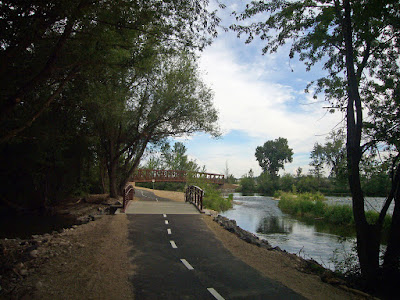