Celebrity awseomeness on a bike

The other day, I commented about Alec Baldwin's irresponsible riding style, and how he sets a bad example for his legions of adoring fans.


In stark contrast... I believe this fella was once a celebrity, too. 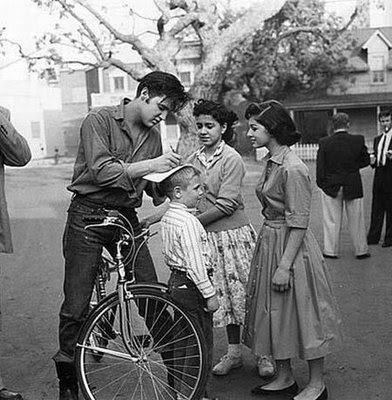 Check it out... he's not yappin' on his cellphone or riding down the wrong side of the street. In fact, he's obviously safety-conscious, since it looks like he's wearing Levis 501s tucked into his dapper Wellington boots. And I assume he's in the process of signing an autograph for one of his fans.

Thank ya. Thank ya verruh much.

(One has to wonder... does the kid in the photo keep a copy to show his friends his "brush with greatness"? Or better yet... maybe he had his head bronzed while the ballpoint-pen impression still lingered in his scalp.)