On Friday afternoon, March 9, Lona Linzy Hymas Smith, age 50, was riding her bicycle eastbound on Highway 30 toward Burley. (For those not familiar, Burley is a quiet little farm town, and Highway 30 is a 2-lane, 55mph rural road that runs roughly parallel to the main thoroughfare, I-84.) She was approached from behind by Michael Lee Burt, who was in a truck.

According to the news report, "Burt told responding deputies that he was driving on Highway 30 heading eastbound into Burley around 6 p.m. Smith was riding her bike alongside the road, also heading eastbound. Burt told police he moved over to the left as far as he could to avoid the bicyclist, but there was a car coming westbound toward him. Burt said just as he went to pass the bicycle, the rider looked back at him over her left shoulder and "bolted" in front of him. Burt said he could not respond quickly enough and struck the bicycle with the front of his truck. He then stopped his truck and went back to check on the rider."

The rider was gravely injured, and died at the hospital.

Police officers say she was riding on, or just barely to the left of, the fog line. (Right where she should be, if there isn't a wide, smooth shoulder.) And the road was probably straight for miles in both directions.

But after reviewing the case, Cassia County Prosecutor Al Barrus has decided not to file any charges. "We just don’t see any way that we could prove he violated traffic laws, which is what we would have to prove in order to prosecute a manslaughter case.” (Story)

Um, how about illegal/unsafe passing?

"The driver of a vehicle overtaking another vehicle proceeding in the same direction shall pass to the left at a safe distance and shall not again drive to the right side of the roadway until safely clear of the overtaken vehicle." (Idaho Statute 49-632.)

How hard would it be to prove that there wasn't a "safe distance" when Burt attempted to pass?

What if it had been another car, or a tractor or piece of farm equipment (a common sight on Highway 30), rather than a bicycle, that Burt came up behind and tried - very irresponsibly - to pass?

Based on years of observation, I say that cyclists are assumed to be responsible for any accident they are involved in, unless the evidence otherwise is open-and-closed blatant. A certain percentage of motorists would dismiss the whole thing by saying, "If she was riding on a road that was made for cars, she had it comin' to her." If I'm wrong... prove it. Sounds like poor Ms. Smith was doing everything right... she just had the misfortune to be sharing the road with an impatient motorist who thought the 5 seconds he could save was more important than her safety. (If he had it to do over again, I bet he'd ease off a bit. But there's no do-over.)

I wish I'd met her... she was renowned for her talent at woodcarving, and was a beloved member of a family. (As are 'most all cyclists who are killed by an impatient motorist.) Read about her HERE. See her artistry HERE. (Fantastic!!)

A wood carving by the deceased: 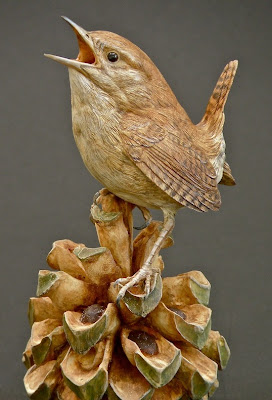 Another tremendous loss with seemingly no one being held accountable.

Unfortunately this type of scenario is so common that there is a term for it: the "Single Witness Suicide Swerve".

Too sad. We are no better off than the bug on the windshield.