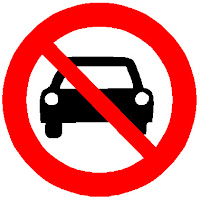 Over the course of a year - September 2010 thru August 2011 - I kept a journal of my car trips, both as a driver and as a passenger. And in that time I traveled by motor vehicle 50 times. (I may have omitted a trip or two from the journal, but that's my best effort to keep an accurate record.)
- Three of those were out-of-town family excursions - to the Oregon Coast, McCall, and Sumpter, Oregon.
- 20 were local trips, and I was a passenger.
- 23 were local trips when I drove and had passengers.
- One trip was to take the car for an emissions inspection. (Why me?!!?)
- Ten or so trips were to procure and transport large and/or heavy stuff. Three trips were to get Craigslist bicycles! One for the granddaughter, one for my son, and one for myself.
- I only went car-trippin' 2 times in April, and again in July.
Posted by Bikeboy at 9:38 PM

Hi! I just found your blog. I just started commuting to work via bicycle this year, and I am addicted to being on my bike, I LOVE it! I wanted to say I really enjoyed this post, I mentioned something on the Tour de Fat's Facebook page about this. It really is not practical to completely forego driving a car, unless you're in a very unusual situation. I have a feeling most people who do the challenge have a second car. Anyway, I really like your blog, but only had time to read a few posts so far. Do you go into detail about winter biking much? I've been trying to learn about how to do it successfully, but would love the insight of someone who knows this area and its weather. My commute is from Meridian to near the aiport, 24 miles round trip. Any tips regarding apparel, equipment, or anything else would be greatly appreciated! : )

Hey, Quantum... welcome! And thanks for your kindly remarks; I hope you check back.

You might check THIS as a starting point for winter cycling.

If you've lived in the area for long, you're aware that we typically only have snow-covered roads ten or a dozen or so times each winter. Usually it warms up enough during the day to melt it off. We DO deal with short days (dark), drivers who carelessly hit the road with frosted-over windows, etc. Scary stuff! But much of the additional harzad can be mitigated, at least to some degree.

A 24-mile round trip on busy roads in the winter would be a challenge, indeed! (I'm lucky because I'm only about 3.5 miles from work, and can stick to sidewalks and residential streets when the going gets tough.)