IMO, one of the most significant threats to cyclist safety is the motorist who is distracted from that critical task, by whatever it may be. And some of the most common distractions are posed by electronic handheld devices, most often cell phones. More recently and alarmingly, drivers are composing text messages on their tiny 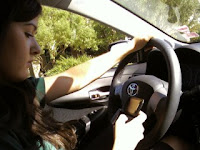 keyboards. (Anybody who would do that while driving doesn't have enough common sense or concern for the safety of his fellow citizens, to be using public roadways!)

Many jurisdictions - including both Twin Falls and Meridian here in Idaho - have passed specific laws prohibiting texting-while-driving. Critics claim that the current inattentive driving laws are adequate... and I'd agree, if they were vigorously enforced. But "inattentive driving" is a matter of judgment, and very hard to prove unless an accident is involved. Probably a third of the motorists I see these days could be accused of inattentive driving, but many don't get into accidents... often because of the avoidance maneuvers by more diligent citizens.

State senator John McGee tried to get a statewide ban on the practice enacted last year, and pledges to do so again this year. According to McGee, "Texting while driving is 30 times more dangerous than even drinking while driving."

Another supporter of such legislation is Liz Catherman. Her daughter Kassandra, 18, was killed while texting in a tragic accident, when she drifted into oncoming traffic.

I had a huge change of heart about Liz Catherman and her motives while watching a TV story a couple days back. Her daughter was at fault in the fatal accident. I've always felt that there were other overlooked victims - those who were just in the wrong place at the wrong time.

I was surprised by Ms. Catherman's compassion for those other victims. In the story, she explains, "On Dec 29th, 2009...my daughter made a couple of poor decisions...she decided to text and drive and not wear her seatbelt. When you're on that public road you're involving the public and the public has a right to be safe on the roads."

My hat is off to Ms. Catherman. I wish other roadway users realized, like she does due to her personal tragedy, that texting-while-driving is a POOR decision!

I think we live in a culture where business people need to 'hit the ball over the net'. Teens consider it rude not to reply immediately to texts. Home schedules would grind to a halt without immediate communication. We are conditioned to pursue this level of efficiency but we are all supposed cease this behavior once we sit in our respective 5,000 pound pieces of steel and glass. Anyone can win an argument in a forum like this by saying "Just put the phone away" - but we can see its just not happening.

I just read that 72% of teens text daily - many text more 4000 times a month. New college students no longer have email addresses! They use texting and Facebook - even with their professors. This text and drive issue is in its infancy and I think we need to do more than legislate.

I decided to do something about it after my three year old daughter was nearly run down right in front of me by a texting driver. Instead of a shackle that locks down phones and alienates the user (especially teens) I built a tool called OTTER that is a simple app for smartphones. I think if we can empower the individual then change will come to our highways now and not just our laws.

Obviously laws can be broken, so just having an anti-texting law on the books is not a solution.

I checked out your OTTER app. From the website: "OTTER enables parents to control the texting habits of their teenage drivers with the first of its kind GPS / Parental Control Feature. Parents can enter a password and know that while their teen's phone is in a moving vehicle, OTTER will silence all primary text notifications and auto-reply with an anti texting and driving message."

I'm good with that. Very ingenious. (Some would argue that passengers in moving vehicles can safely text. But maybe they should endure the inconvenience of not being able to, until an app can somehow distinguish between drivers and passengers. After all, we survived for millennia without being able to text at all!)

I hope that eventually our society wakes up and realizes that it is NOT acceptable to have thousands of highway deaths every year, simply because drivers are distracted. Until some STIGMA is attached to texting, like drinking while driving, the problem will continue to be pervasive.