Jeff Mapes is a political journalist for The Oregonian. He is also a transportation cyclist, and has written a book, Pedaling Revolution, "How Cyclists Are Changing American Cities."

He is speaking in Boise on Thursday evening, September 16. (At the Linen Building, five bucks.) Might be interesting. (I just heard about it on BSU radio this morning.)

The book sounds interesting; I've reserved a copy at the library.

The online synopsis: In a world of growing traffic congestion, expensive oil, and threats of cataclysmic climate change, a grassroots 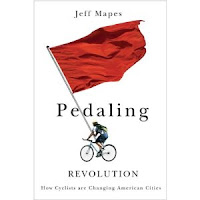 movement is carving out a niche for bicycles on the streets of urban cityscapes. In Pedaling Revolution, Jeff Mapes explores the growing urban bike culture that is changing the look and feel of cities across the U.S. He rides with bike advocates who are taming the streets of New York City, joins the street circus that is Critical Mass in San Francisco, and gets inspired by the everyday folk pedaling in Amsterdam, the nirvana of American bike activists. Mapes, a seasoned political journalist and long-time bike commuter, explores the growth of bicycle advocacy while covering such issues as the environmental, safety, and health aspects of bicycling for short urban trips. His rich cast of characters includes Noah Budnick, a young bicycle advocate in New York who almost died in a crash near the Brooklyn Bridge, and Congressman James Oberstar (D-MN), who took to bicycling in his fifties and helped unleash a new flood of federal money for bikeways. Chapters set in Chicago and Portland show how bicycling has became a political act, with seemingly dozens of subcultures, and how cyclists, with the encouragement of local officials, are seizing streets back from motorists. Pedaling Revolution is essential reading for the approximately one million people who regularly ride their bike to work or on errands, for anyone engaged in transportation, urban planning, sustainability, and public health—and for drivers trying to understand why they’re seeing so many cyclists. All will be interested in how urban bike activists are creating the future of how we travel and live in twenty-first-century cities.

As a cyclist in Boise, Idaho, I s'pose I'm sympathetic to the notion of transportation cycling as "political statement." It's a political thing in several urban settings across the Fruited Plain. Personally, I've never felt like I was making a "political" statement when I ride. But I like to think I'm making an economic statement and perhaps a "lifestyle" statement.

(Ironically, the book is listed at Amazon.com under "Outdoor Recreation.")
Posted by Bikeboy at 10:19 AM

who has a HUGE red flag so we can duplicate the cover art ;)

"Bronco Nation" has an orange flag about that size... is orange close enough??
(-;

Sounds interesting but will not be able to attend. It is being presented by the Boise Bike Project. Too bad the bike shops could not do their part to promote cycling in town before this.


Side note: My brother and I completed the 170 mile loop of rail trails in Northern Idaho. Full write up with pics coming soon.