If you can schedule it, I'd strongly recommend you make time for the Tour de Fat. The parade is at 10am, at Ann Morrison Park. Other festivities follow.

The Tour is sponsored by New Belgium Brewing Company, of which transportation cycling is a big part of their culture. (Oh - and they make Fat Tire Amber Ale, too, for the imbibers.) 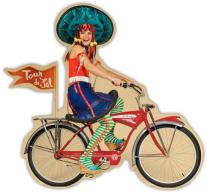 Here's the "First Commandment": Put no means of transport before thy bike: Come by bike because not only are bikes fun, but they help stave off some of our most wicked ills: Traffic, laziness, and pollution. Tour de Fat has a solution: ride this day, every day, and definitely when Tour de Fat heads your way.

Boise is fortunate - one of 13 tour stops, most of which are in much bigger cities like Chicago, Minneapolis, Denver and San Francisco. Which speaks highly of our "bike community" in Boise.

I took my granddaughter last year, not knowing for sure what to expect. (And realizing that as a teetotaler, it might be of limited interest to both of us... we weren't expecting to stay long.)

As it turned out, the spectacle was well worth the effort of getting there. Wow! What an assortment of both humanity and "bicycles." (I use the term bicycles very loosely - they ranged from store-bought bikes to elaborately decorated store-bought bikes, to wildly imaginitive "Dr. Seuss Meets Rube Goldberg" contraptions.) The crowd was festive but not raucous - I never felt my granddaughter was in danger of being bruised, either physically OR emotionally. I'd rate it PG. May not be for extremely "sensitive" viewers, or the very easily offended... but for most of us, it's fine.

Comments from last year can be read HERE.

A nice YouTube video that captures the essence of the 2009 celebration can be seen HERE.

Should be a fun time. I plan on volunteering with Boise Bike Project. They are helping with the parade and some other items.