One of the selling points of cars is their crash-worthiness.

As of 2010, car occupants are strapped in securely, and surrounded by engineered "crumple zones" and airbags.

(It wasn't always that way. When I was a kid, seat belts were essentially uneard of. Jay Leno once described a 50s-era Buick: "The metal knobs stick out at you like Bowie knives. If you crash it, just hose off the dashboard and sell it to somebody else.")

All of this is a little disconcerting to the transportation cyclist, who is aboard a ZERO-STAR crash-worthy vehicle! On a bike, the only way to avoid injury, or worse, is to avoid the accident! And it's troubling to share the road with folks who are driving vehicles that were chosen specifically to allow them to survive the accidents they will be getting involved in.

At the same time, there is essentially no ongoing skill test to get a driver's license. Maybe it's different in other places, but once you have a driver's license in Idaho, all you have to do is pay your renewal money and pass the eye exam, and you're good to go. (I believe once you reach a certain old-age threshold, you need to prove your abilities.)

There also seems to be little incentive to be a good driver. You don't need to prove you know or understand traffic laws. And even if you get your license suspended... there are plenty of folks out there driving without a license. The situation seems to be generally tolerated by society.

Idaho's drivers are some of the better ones - #8, down from #1 - at passing the GMAC "written test." Take that, New York and New Jersey! Of course, knowing the answers is different from adhering to them. There seems to be a prevailing attitude that "Traffic laws are for the common people... my superior skills entitle me to treat them as merely suggestions."

This photo is the aftermath of a crash that was caused by a text-messaging kid. He was driving the smaller vehicle and sustained serious injuries. If his brain still functions, perhaps it's wondering how such a skilled motorist could've had such misfortune. Story HERE. 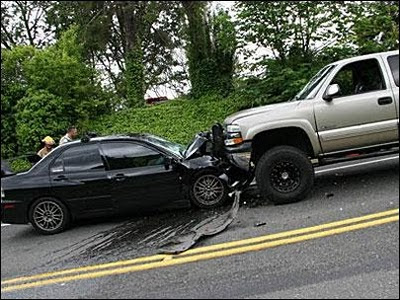 I wonder if texting was involved in a similar incident in Boise earlier this year.

I pass the memorial for the truck driver daily on my way to work, and you can still see evidence of the collision on the pavement. It's a sobering reminder of the dangers out there.