I'm happy I participated in the Ride of Silence last night. I'd say there were 15 or so riders - not as many as I had optimistically anticipated, but Bob T (who was there this year and last) said that was probably double the number from last year.

I got there moments before departure, after riding from home. (Not a word to my dentist, please! I had a tooth extracted at about 4:45, and was instructed to go home, take it easy, and put my feet up. Sorry, man - I've already got plans! But I did generally take it easy, and the pain pills were doin' their stuff.) George Knight, a very involved transportation cyclist, was giving some last-minute instructions, and then we rolled.

The route was entirely on lightly-traveled North End streets, which was a "plus" for a silent, contemplative 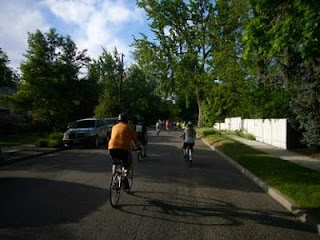 bike ride. And indeed it was essentially totally silent. Not one word was spoken, as far as I know. One guy's vintage bicycle rattled a little bit, but not distractingly so. Folks in the North End were going about their generally-quiet business. At one point, 2 or 3 cars queued up behind us, and one guy was impatiently revving his motor a bit, but eventually peeled off.

I was contemplative. I was partly compelled to contemplate the "hillbilly gap" where my tooth had been a couple hours earlier. But I also contemplated the gap left in peoples' lives when they've lost loved ones in bicycling accidents. I contemplated what it must be like, going through life weighed down by guilt over having killed or injured someone else. I contemplated the responsibility we as cyclists should feel, to be good citizens on the roadways. And how critical it is, to not only avoid making mistakes that could jeopardize our safety, but to compensate for the mistakes of others. (Defensive riding is the only way to survive, in the long run.)

We stopped for a few minutes at the corner of Hill Road and Smith Avenue, mere feet away from the "white bike" left in remembrance of Kevin Pavlis. Although I never knew Kevin personally, I still feel a sense of loss. How much better the Ride of Silence would have been, if he and other departed cyclists could've joined in.
Posted by Bikeboy at 12:57 PM

Nice summary, Bikeboy. Hopefully with better publicity and fewer conflicting events there will be even more participation next year.